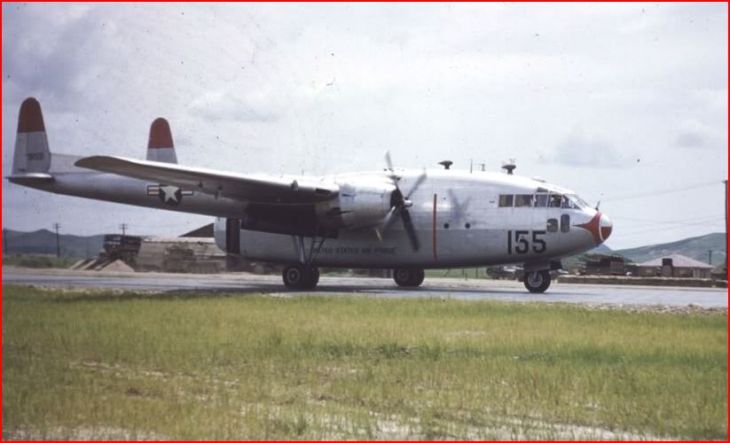 The Herculean effort to save livestock pinned down by snowstorms in the Rockies this week refreshed a vivid memory held by many of my contemporaries, of the incredible snowstorms of 1948 that closed schools and businesses from the Sierra eastward to the Rockies and even dropped 6 inches of snow in Las Vegas.  The earliest bellwether of what lay ahead for ranchers might have been a blurb in the Jan.27, 1949 Reno Evening Gazette about two C-46s dispatched to Arizona from Luke Field in Riverside, Cal. to search for 50 ranch hands lost in the back country.  As kids we caught a lift to Reno’s Hubbard Field to watch some arriving 1942-vintage Air Force C-82 (later re-designated C-119) Flying Boxcars (pictured above), twin-engine planes with huge clamshell cargo bay doors that could be operated in flight. The planes were staging in Fallon from all over the nation, some from nearby McClellan Field in Sacramento and many more from the 316th Air Carrier Wing in South Carolina.  The initial plan was to airlift hay to Ely and Elko, from where Nevada and Utah National Guard trucks would deliver it to the isolated livestock. But eastern Nevada airports and roads were useless due to being snowed in, so the Air Force pilots suggested dropping the hay from the planes directly into the herds and bands of livestock.

Hubbard Field saw incidental haylift activity for the next month, as the majority of the airlift centered at Minden’s and the Navy’s Fallon airstrips.  We recall our friends’ fathers, many relatively fresh out of WWII service, departing Reno for two or three weeks with the Nevada National Guard’s heavy trucks, and, if memory serves, a couple of Isbell Construction’s low-boys with drivers. Reno restaurants and food provisioners were pressed into service providing meals around the clock; and merchants kicked in to provide a few creature comforts to the legion of personnel amassing for the airlift.  By the first day of February it had become a major federal project directed by no less than Harry S Truman, with the Nevada effort repeating itself all over Utah, New Mexico, Arizona, Colorado, Idaho and Montana.  The Feb. 4, 1948 Gazette relates that a pattern had become established, of five to six tons of hay being loaded into each C-119 for the 220-plus-mile one-way trip to the ravaged areas.  The hay arrived by commercial trucks from California’s Central Valley where it was handed off to 48 National Guard and army trucks shuttling between Reno, Minden and Fallon.  The Feb. 5 Gazette reported that the storm had increased, temperatures had dropped below zero and that the S.P.’s City of San Francisco passenger train had become marooned in Wells.

Each plane carried an Air Force pilot and co-pilot, a flight engineer and a loadmaster, who were joined by two civilian volunteers.  Over the drop area the two civilians pushed four 75-pound hay bales aft toward the open clamshell doors where the FE and the loadmaster then kicked the bales out to the animals below (all four crewmen in the cargo bay were tethered to the plane.)   My youthful recollection was that volunteers lined up five-deep to get to be one of the two civilians aboard each sortie.  A contingent of ranchers and hands who knew their own topography rode along to assist the pilots in navigating to drop points where their own cattle and sheep were likely to be found.

One can only speculate of the thrill experienced by a Basque herder getting his very first airplane ride while the plane dove down a box canyon at 150 knots with a 30-knot wind bouncing it around and 15-below-zero air screaming through a hole as big as a garage door in the back of the plane.  Over the deafening roar one can almost hear him utter “Well, son-of-a-gun!” in Euskara Basque, Spanish and English.  Nevada writer Beltran Paris, a Basque sheepman who’s made this column before, wrote an excellent account of his terrifying ride over his own ranch.  A Nevada Guardsman who flew as a volunteer on two flights from Minden related to me that they often needed to make multiple passes over a herd or band, and after a first drop the pilot made a sharp turn down a walled canyon to start his second run. The remaining load of hay slid, pinning another Guardsman under a half a dozen bales and confronting the pilot with a ton of weight suddenly shifting his center-of-gravity while already holding a steep bank.

These guys were good.

On Feb. 27 the Journal carried a photo of a sort-of victory celebration with a bunch of guys at the Elko airport; visible are Elko rancher and hotelman Newt Crumley and local ad icon Gene Evans, then editor of the Elko Free-Press.  Why the celebration?  The 27 reciprocating-engine aircraft had logged 1,600 flight hours on 26 out of 28 days under Arctic conditions, with some 330 take-off-and-landing cycles in high winds on icy runways and dropped 1,800 tons of hay (they lost two days to weather or unavailability of hay.)  Save for one errant hay bale entering a rancher’s shed at a high rate of speed in Little Cherry Creek and demolishing his wife’s brand-new-fangled washing machine, nary a glitch was reported.  And the sun had come out…

Eastern Nevada’s Operation Hay Lift was a success – when the snow melted off in the spring, the ranchers determined that 80 to 85 per cent of their livestock – cattle and sheep – had been saved, and this was typical throughout the western states where similar endeavors had been ongoing.

Now anticipating a couple of e-mails: Yes – there was a second Operation Hay Lift, in March of 1952, and yes, the City of San  Francisco was marooned once again, that time on Donner Summit.  I thank James A. Young of the U. S. Department of Agriculture, the Nevada Historical Society and Phil Earl for their past research.