What ho — a new tradition once appeared on the Reno skyline: a Christmas tree standing two stories above the top of the brand-new Harrah’s Hotel, and ringing the hotel’s parapet was a new necklace of gold. The brightly-lit Frosty and Santa — donated to the city by Del Chemical’s wanne-be bad-boy kingpin, the late Rocco Youse — stood ten feet high on Belle Isle. The City of Reno, Sierra Pacific Power and Bell Tel crews were putting up candy canes on the streetlamp poles downtown and stringing colored lights across the Truckee. Alongside the candy canes: loudspeakers with songs of the season. (If this Sunday morning daydream were taking place in 1955, a flood two days before Christmas Day would take out those strings of lights and half of downtown with them.)

Carmine Ghia   (left), with photographer Lo Phatt (left below), typist Ophelia Payne, our driver Ashton Martin, proofreader Text Writter and all the other staffers — are looking forward to our annual staff party, preferably in a candlelit room, embers glowing in a fireplace and a hot-buttered rum nearby. (That’s me on the right in a 1946 Bud Loomis photo in Whitaker Park with the Eichbush house in

the background.) In years past we’ve gone to Siri’s on East Fourth and the Christmas Tree up Mt. Rose highway, whose name 50 years later would be changed in order to remain politically correct. The Circle RB on West Fourth, named for singer Reno Browne and later to become the Chinese Pagoda and finally Micasa Too, has a great party room. Just west of that, we went once to the old Villa Roma. You can call it the Glory Hole or you can call it Washoe, now you can call it my buddy Curtis Worrall’s Whispering Vines Wine. But whatever, it was a great place for revelry. And even further west, one of the grandest party rooms ever was at Lawton’s Resort, rebuilt, but now just a huge pile of kindling. The El Cortez Hotel had the Squire Room and the Trocadero Lounge. One of the prettiest night views in Reno has perennially been the view westward up the Truckee from the Holiday Hotel’s Shore Room. (Still is, from the Siena, or whatever it’s called now.) 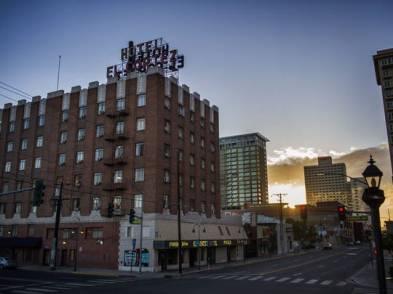 Washoe City, or to the Lancer (or is it the Mesa?) across the Mt. Rose highway from the present Galena High School. We could go high-end to the Waldorf downtown, with (the now late) Jack Joseph at the piano. I digress for an anecdote: I once wrote of “ … Jack Joseph, tickling the ivories at the Waldorf … ” Jack called me the next week, said “Karl, I never played the piano!” I told him he’d been warming that piano bench for 25 years, and he responded, “Yeah, but I never played the thing. I never learned how … ” Who’da thunk it? Or we might book the private room off the Mapes Sky Room. Or trek down Truckee River Lane to the River Front to the west, oft-confused by holiday revelers with the Bundox within the River House to the east. Different places.

Still downtown, the venerable old State Building in Powning Park — too big for our little group, but pleasant. We’ve written about it here before. Vario’s has a private room, as does Eugene’s — the “Gypsy” room. But if we’re going that far south of town on South Virginia, all the long way out to the present Peppermill, we might as well go to the Supper Club or The Willows. In college we might have booked our party at Bish’s Game Farm away out of town by the swamp on the present Longley Lane, or maybe at Flindt’s barn, where one more or less bullet hole in the ceiling never really merited too much attention, but we’ve matured vastly beyond that behavior. Sort of. Always a favorite: the California Building in Idlewild Park. Lots of parties were held at the Darrel Dunkle American Legion Hall on Ralston Street or the little Masonic hall upstairs above Statewide Appliance on North Virginia just north of Fourth Street/Highway 40 (easy parking on Sewell’s parking lot). That new-fangled Silver Legacy would change all that in 1995.

OK, the Casa de Amor (bet you’ve all forgotten that name!) later renamed the Cove and finally just Miguel’s at the south end of town on South Virginia by Mt. Rose Street, if you can stomach a reindeer chimichanga. Even further out, we can try to book the Continental Lodge, either their Central Park Lounge or the private room in the south end of the restaurant. The Doll House out South Virginia has a good dance floor, but our staff can’t ever go back there because we booked Snoshu Thompson’s dance band a few years ago and our staff grammarian Persephone did the hootchie-kootchie on the bar with the guy I hired to play Santa Claus.

We could go east on East Fourth Street almost to the Sparks city line and try for the Gay-Nor Room in Ray’s Big Y or the private room in the back of the Chuck Wagon down the street. But every time we go to Sparks Joe Mayer, the Stockwell twins and Geno Martini crash our parties. We’ve tried for the Nugget’s once-convention center-later-Trader Dick’s on the north side of B Street in Sparks, but it’s always a pretty popular venue. Anyway, the Sunday Our Voices Column Christmas Party will be a doozy, if and wherever somebody will have us. And make it a good week; buy a kid a warm jacket for the Salvation Army’s barrel and God bless America.

One thought on “An old-time staff party”