Once again, the men of the Black Bear Diner, in their ongoing effort to elevate the level of culture in the Truckee Meadows, are hosting a concert at the diner (their names are Carbon, Wassenberg, Kittell, diner owners O’Looney and Mavrides, the Reid/Reed boys Mike and Tom, Duhart, Felesina, Breckenstein, Cloud, Mastos, Lauren House with his incredible tenor voice and Hinxpeeps with his double-bell euphonium), and with any luck at all they may feel the electric thrill that Professor Harold Hill once enjoyed when Gilmour, Liberati, the Great Creatore, Pat Conway, W. C. Handy and John Phillip SOUSA all came to town on the same historic day, with Lida Rose Quackenbush, the only female bassoon player west of River City in tow.
The doors will open at 7 A.M. with the concert beginning an hour later. Parking is available west of the diner, admission is a dollar in advance, and free at the door.
The program shall be:

moderated by Reno’s own Van Vinikow, Supreme Being of the String Beings, [pictured left] whose string-based ensembles have been enjoyed by many local people for many years. Also on hand will be Wenxiu Wlodarzyk [at right], the director of music history at Manhattan’s prestigious Julliard School, discussing another element of contemporary music.

Mr. Vinikow will speak of the creation of a musical key, cited above in the popular “Fanfare” and its origin in our own nearby Comstock Lode. The backstory is that Mssrs.

Mackay, Fair, Flood and O’Brien were hosting a fête on the lower stopes of a mine in their lode for which they were lowering a Steinway concert grand piano, purchased only recently at Sherman Clay in San Francisco and brought up Geiger Grade by a team of Clydesdales, into the mine shaft. The cable supporting the piano broke and the piano landed on an unfortunate employee of the mine. Thus the key of Ab Minor came to be known, the key of A flat miner.

Mr. Wlodarzyk will reveal that a recent contest was adjudicated at Julliard, whose rules were that contestants, working in groups, were to write, record and publish the most annoying, repetitive song ever written; a tune which would make people wince in pain when its first few bars were heard, and moreover, a song that would emulate a song three- to five-hundred years old. 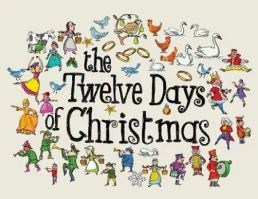 The names of the student contestants who triumphed were wisely withheld, but the winner, using the term loosely, was held out unanimously to be a groaner titled “The Twelve Days of Christmas,” about which one of its lyricists was heard to exclaim, “Let’s submit this bullshit and see if anyone will ever believe it!”

Regrettably, some took the song seriously and it has achieved a certain amount of notice.

This concert, of course, is also pure B.S. and should not be placed in your “things to do” folder…just funnin’ around

photo credit six singers Richard Termine for The New York Times. some text from The Music Man, other stuff from Peter Shickele

4 thoughts on ““Shepherd on the Rocks with a Twist” headlines the men of the Black Bear Diner’s epic Christmas extravaganza…!”