I’m catching hell for not posting for three weeks. Here’s a 2006 column to chew on:

Stuff without a category, maybe a Faded Menu or three

Until the lst local attic and basement is cleaned out and dad and mom’s last priceless antiques are taken to the Nevada Historical Society to put with everybody else’s priceless antiques, this column will always have unlimited new, vital and earthshaking input.

A case in point this morning comes from an old throwaway tourism brochure from the early 1950s that depicts a window into our valley. This Week, dated Oct. 1, 1949 was printed by Cleve Crudgington at Silver State Press (Cleve and his drop-dead gorgeous wife Phyllis were a popular couple in Reno through the 1950s.) In that pamphlet we learn that the University of Nevada football team would be playing St. Mary’s Gaels in Kezar Stadium – that note only a minor squib in 1949, but prescient of a game that would be talked about for 50 years to follow and put Dick Trachok and Tommy Kalminer in the Nevada Athletic Hall of Fame.

We read a name forgotten since our childhood, Laurance, often Larry, Layman. Layman was a Nevada-style Justice of the Peace, probably one of the few in the nation who listed not only his office in the courthouse but his home phone number 2-3116 and his residence at 420 W. Sixth Street. This was for the convenience of a Bay Area couple fresh off the Lincoln Highway desirous of tying the matrimonial knot at 2 ayem – not an unusual event in Reno. Several jewelers listed night numbers, as did Reno Florist at 40 E. First Street, also in order to capture this nocturnal wedding trade. Forty East First Street deserves to be written of herein on some future Sunday morning; kind of a crummy little office building sandwiched among the Majestic Theater, the Mapes, and the YMCA (which would blow up a couple years later.) Crummy, maybe, but half the state’s prominent businessmen and politicians, read Norman Biltz for one, quietly emanated from there (or from Eugene Gastanaga’s Eagle Drug lunch counter, two blocks to the south.)

Here’s an ad for the Mesa (across the Mt. Rose highway from the present Galena High, later to be the Lancer and to burn in 1971 while Glenn Rolfson tickled the ivories.) Just re-read that: Glen Rolfson had nothing to do with the fire. Did I write that? Moving on:  On the way to the Mesa/Lancer (rare picture below), party at the Zanzibar across South Virginia from the present Peppermill. Owner Tilli Botti, a retired Air National Guard pilot, told me before he died just a few years ago that when the Guard was activated in 1968 he leased out the Zanzibar and never once set foot in it again. [Nor did he the rest of his life.] Or, on the way 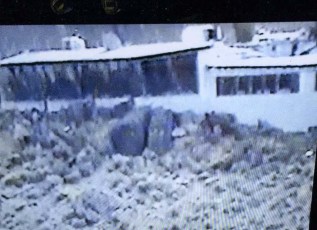 home from the Mesa, perhaps we should stop for a nightcap at the West Indies (Reno’s West Indies preceded Carson City’s West Indies, just as the Crackerbox on Ryland predated Carson’s Crackerbox.) Or try Tommy’s Big Hat on the corner of Moana and Virginia, [later called Two Guys from Italy, still later called La Vecchia and now called the right turn lane of Moana Lane onto South Virginia Street] with the big white Stetson on the roof, rotated by a war surplus Navy radar antenna motor. Next door was the Moana Coffee Shop, “only five minutes south of downtown Reno.” Try driving that today in your Hudson in five.

For some reason I’ve heard from column readers trying to recall a joint on Airport Road, (OK, Gentry Way.) The name Moody’s Lounge must be hard to remember, but it sure did a big late-night business. Confusion also reigns to this day over the Bonanza (no taxes, no cover), then at 207 North Center Street, now north on 395 in what used to be the Branding Iron, [2011: a name that remains alive today in its signature restaurant, the Branding Iron. Good place, by the way…]

International dining: We had it, at the Santa Fe Hotel on Lake Street, “fine French cuisine” (yup, now great Basque family style with a picon or two); here’s an ad for the Chinese Pagoda at 7th and B in Sparks (Sparks’ numbered streets use ordinal numbers, Reno spells them out; go figure.) And that answers the age old question “where was the Pagoda?” (Everybody wants to put the original Pagoda on Sparks’ 4th Street, not 7th.) It later moved to Reno’s West Fourth Street, into the former Circle RB steakhouse – the only Chinese restaurant east of Peking with wagon wheels and stagecoaches on the Formica tabletops.  [I think that tidbit’s in a column somewhere else in this book] Better yet, the Chinese Mint Club downtown offers “Chinese food like mama used to make,” and I wouldn’t touch that motto with a nine-iron. West of town on the “Truckee Highway,” once we  we called it Washoe., note that period that’s not a typo but an integral part of their name. We used to call it the Glory Hole but in This Week in 1949 it was the Villa Roma, with a cute little hat-check chick named Gloria (now Garaventa!) Now it’s my buddy Curtis Worrall’s wine shop. Further out the Truckee Highway was the popular Stirrup Cup in a picturesque old once-ranch house, now restored to a private home housing one of my faithful readers. Downtown again by the Downtown Bowl at 130 N. Center Street (that Harrah’s later took over for offices) and across the street from the Frisco Club (don’t tell Herb Caen that, who, by the way, I stole this column’s hed from) was The Colombo on Lake Street; Ralph Festina, your genial chef. Ralph would later open Festina’s Pizza, and his wife was only one of two people ever to drown in Virginia Lake, a dubious distinction she shared with a 15-year-old boy who drowned at three in the afternoon on the east shore of the lake, on June 17, 1952.

A bowling tournament was in town at the aforementioned Downtown Bowl and the Reno Bowl on South Virginia by the Tower Theater, still using human pinsetters. Nevada State Bowling Association president Len Crocker, our lifelong friend and Nevada State Journal’s ace sports reporter of long tenure, reported that one bowler rolled a perfect 301 (that’s not a misprint; the pinsetter had a wooden leg.) “This Week” reported that the tournament, in three days, would bring about a thousand dollars in bookings to the area’s 19 motels. The Nugget had Five Great Restaurant : the Round House, the Golden Rooster Room, the Pancake Parlor, the coffee shop, and the Prime Rib Room, (Saturday and Sunday nights only.)

And every business plugged above was represented in that little eight-page flyer. Columns are where you find them; have a good week, y’all, and God bless America!