A trip back to the home my family moved into in 1955  – affectionately known as the “Puzzle Palace” – always held a fascination for me. I usually threw in a piece of raw meat to ascertain the mood of those who dwelt after I left it in 1961, and by 1971 my mother was the last to occupy it. 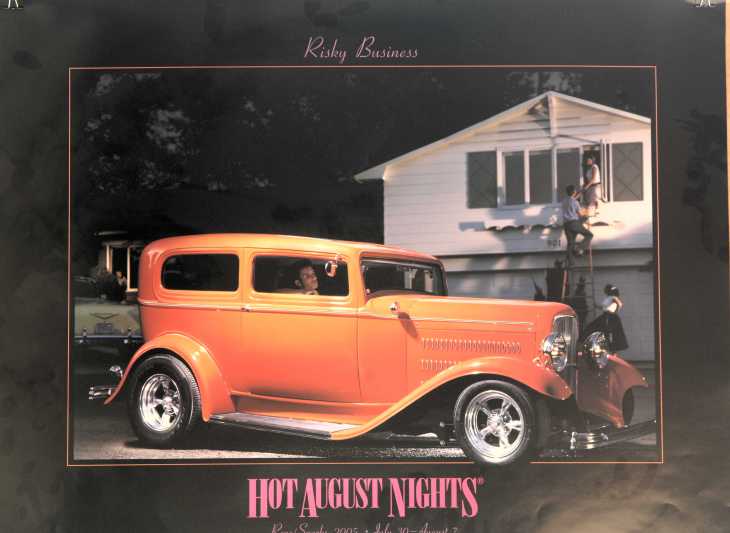 On a pleasant summer Sunday afternoon in 2004 I visited the home and was engaged in hand-watering a piece of lawn that defied the home’s sprinkler system. I was reclining in a folding chair that either I had stolen from the Reno Air Races or donated to them – I was never sure – downing a bottle of Mickey’s Hard Cider and quite content to just watch he world pass by. Life was good.

A nice-looking car drove up, then stopped. Two young well-dressed gents got out; one with his camera started taking pictures, the other approached me. “We need your house,” he proclaimed. “You’ve got it,” I  responded. “The old lady in the master bedroom goes with it.”

“No, no, no,” he countered. “We’re with Hot August Nights’ publicity firm, and this house is configured just the way they want it.” He described what they had been driving around, seeking: They wanted a south-facing white or light-colored house with a generous two-car driveway and windows on a second floor above the garage. The Puzzle Palace had all these attributes.

The scenario for the forthcoming 2005 poster was that the young chick/daughter of the home’s owners, had been forbidden to see a certain rowdy dude with a hopped-up jalopy. But, as lovebirds will do, he and she elected to violate this edict and by prearrangement, he would show up with a ladder and she would exit a bedroom window to join her swain. At sunset. Risky Business, it was to be called. Made sense to me.

“We will need the total run of your house and yard from about 3 o’clock to 10 o’clock at night, to prep the house and driveway then restore it to the way it was before we get here.”  So, deal was done. “A contract will come to you with releases for our crew and…….blah blah blah.” “Just tell me the date,” I asked. They said that the graphic director would have to compute the optimum time of sunset, and then they’d let me know. Made sense to me, said I.

Compute the optimum time of sunset? I thought that they were turning fun into hard work, computing the right time of sunset for a snapshot. I had no idea…

So, back into their car they went, and back to my watering went I. Thinking that I probably should tell the old lady in the master bedroom. Naahhh, not yet, I decided, and popped another Mickey’s.

The contract and the agreement arrived to turn the Puzzle Palace over from the old lady in the master bedroom to the Hot August Nights publicity firm. I executed it on the “owner” line and put it back into the mail – no sense having to explain anything. Yet. The day for the shoot – weather permitting – as I recall was near June 21, longest day of the year.

As the owner I felt an obligation to make the parties comfortable. A trip to Raley’s resulted in a supply of soft drinks and beer with few bags of chips. I dragged an extension cord out of the garage for power. The hose reel was close by. I hid my purloined, or donated, Air Race lounge chair. I was ready.

Three o’clock came and went. Maybe I got the wrong day. Or they did. The first sign of life came when the catering truck – Pinocchio’s or Nothin’ To It – I forget which – rounded the corner. A catering truck? Yup. I offered them the extension cord. They had their own generator.. In the ensuing six hours, they’d  make sandwiches and nosh for the cast of thousands apparently headed this way. And mixed drinks. So much for my trip to Raley’s!

The neighbors started to appear, two-by-two. A crew appeared in a pair of vans – some began hosing down the driveway, others went in the house, taking screens off windows, tying back drapes and placing light fixtures that they’d brought. Another truck appeared, towing a small trailer. Within the trailer, a generator. So much for my extension cord.

More neighbors showed up – the number grew to maybe 40, eventually 100 or so – all were offered a sandwich or a drink. A police car drove up – I thought this ought to be good…the cop got out and said, “Just came by to see the photoshoot – we heard it was this afternoon…what time do you need to close the street?” “Have a sandwich,” I said.

An hour later, the street all but blocked by vans, food trucks, theatrical lamps on dollies that would later allow the home to show even although it was to be dark outside, the generator trailer with cords snaking all over the vista, came the stars of the show: the rods. A candy-apple orange ’32 Ford two-door sedan, and a ’57 Chevy ragtop.

And the personalities on the double date arrived: one guy who would sit in the sedan, rolling a joint or whatever, awaiting the others; a young couple, he to climb the ladder and help his breathless date with her poodle skirt climb out my old bedroom window, while the dude in the sedan’s date, a young lady of extreme beauty with bodacious ta-tas would hold the ladder for the escaping couple. And all dressed right out of Reno High School authentic 1959 Under-the-Dome garb, one dude with a pack of Lucky Strikes rolled up in his sleeve. I think the Luckies went bye-bye in the name of political correctness. They all arrived in one car and posed with the neighbors for photos.

I peered around at this specter. Yike’s…what have I enabled????

Various camera positions were tried, and the orange sedan was relocated several times until all was just right. The camera was a large-format industrial film camera, with a digital camera mounted to it to capture the same image as the main unit for use in aiming the units. Many of the strobe lights in place – those in the sedan – were slaved to the camera.

The old lady in the master bedroom asked, “What’s going on in the yard?” “Oh, a few people taking pictures of the house, Mom.” No sense going in to a lot of detail.

The hour for the photo was drawing nigh. There was really no need for the Bel Air Chevy in the poster, but it was parked in the driveway where the signature “V” on its trunk could be seen. Lights were placed in the orange sedan, and beneath it on the chassis, to fill in the shadows. Large silver umbrellas were placed to bounce light onto all in the scene, and the generators cranked up and the floodlights came on, to wash the house in a dim light. Note that the photo was taken with a tiny amount of daylight still visible through the tree brances above the car…

One on-the-scene, seat-of-the-pants decision was made, occasioned by the home’s window fenestration behind the Ford, which is actually the dining room of the home. There was a dark void above the trunk of the Chevy, so a lamp was placed to illuminate it. It still appeared awkward, so a neighbor lad was seized and placed in the window, portraying a little brother, holding his hand over his mouth in awe of his big sister’s tawdry behavior!

The field review of the shots, made by the inspection of the digital twins to the actual film captures, revealed that there were sufficient shots to work with in the darkroom and computer, to make into a poster for the HAN event the next year. And so, the task of restoring the Puzzle Palace to a residence and not a movie set, began. Piece-by-piece, item-by-item, window screen-by-screen, peace once again reigned over the manse. Sort of.

The vans, food trucks, generator trailers, the police car and others left one-by-one (did I mention that good ol’ Engine 5 from the Mayberry firehouse dropped by?); the ’57 Chevy and the ‘34 Ford rods cruised off and the two young couples went up Windy Hill to neck for a while then off to the Mapes Coffee Shop for a sundae.

And in time I got a handful of posters in the mail. I framed one, and showed it to the old lady in the master bedroom. “Why, that’s your old room,” she remarked. “And who’s that climbing out your window? And who owns that orange jalopy in our driveway? When was this? What kind of people are you bringing over here, anyway?”

As I wrote, peace reigned again at the Puzzle Palace, sort of …