The sequel: click here CLOSING THE BOOK – THE AFTERMATH OF THE EVENT

The stranding of the Southern Pacific Railroad’s City of San Francisco premier passenger train a few miles west of Norden on the Donner Summit on January 13, 1952 with 226 souls on board always generates a great deal of ink. And I’m as guilty as any writer in beating it to death; after all it put little Reno in the national spotlight for the five days it took to get them off the hill.

Many years ago, making contact with or visiting the California State Railroad Museum in Old Sacramento, SP Railroad’s headquarters at One Market Street in San Francisco and raiding the morgues at the San Francisco Chronicle, the Examiner, the Call-Bulletin, the Sacramento Bee and the Truckee Sierra Sun, I amassed a lot of stuff about the event. And I give attribution to John Kelly’s excellent book about it, Stranded Streamliner. (Upon the sale of the Mighty SP to the Union Pacific Railroad in 1996, the SP’s archives were split among the Bancroft Library at UC, the Stanford University library, and the California State Railroad Museum.)

Long story short, it’s that time of year again, and this year rather than strugging to rewrite an old column, I’m dusting of a few pictures you may enjoy…

All images subject to copyrights as shown. All image captions and the website in its entirety are © Karl Breckenridge 2019 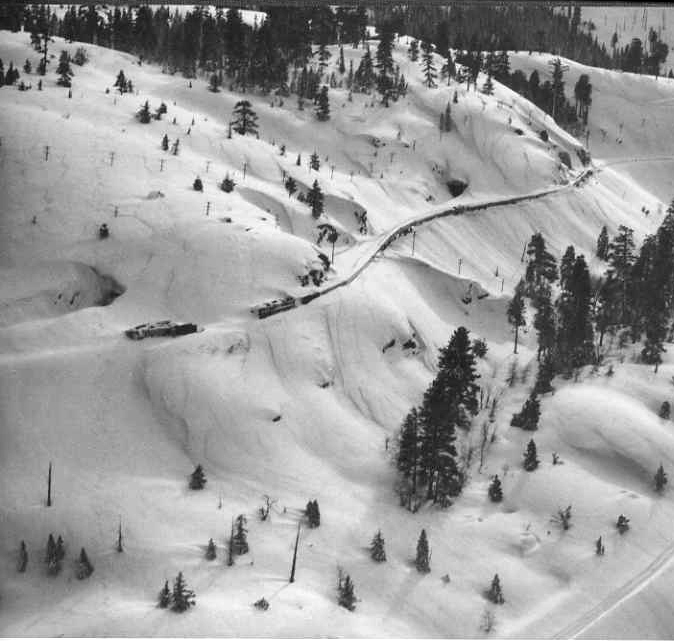 Here’s the train … this is looking west, the head end of the train is going away from the viewer. The smoke column at the rear of the train is from a steam cab-forward locomotive that attempted to pull the train towards Truckee but derailed. It did supply steam for heat to the passenger train all of the first night, but its boiler flamed out when a valve was left in the wrong position. Toward the left/east of the steam loco is the carcass of a steam snowplow that also died on the rails, obstructing rescue efforts. Above the plow the east portal of a tunnel, which appears in many photographs, is visible. This tunnel serves the westbound track, parallel to the track in view and covered by snow. The snowbound train, while westbound, is on the eastbound track because the City of San Francisco on the prior day was also stuck, but towed to Colfax by a steam locomotive, causing light damage to the tracks. Highway 40 is apparent in the lower right hand corner, where the passengers eventually walked out to the awaiting vehicles. This photo, taken early the first day the train was snowbound, was taken from a light plane rented by the San Francisco Chronicle, with attribution given to Ken Yeo, a Chron staff photographer

Communication with the site proved a huge dilemma, abated by the California Department of Highways appropriating a California Highway Patrol Oldsmobile as the best walkie-talkie available in 1952, loading it on a flatcar and utilizing its two-way radio quite liberally. On a lighter note I’ve never used this shot in a Power Point presentation that some audience member didn’t  pick up on the hogleg revolver on the CHP trooper’s hip!

The California National Guard sent three flatcar loads of Weasels from Fort Mason, but like the Coast Guard helicopter, they had trouble with the terrain and the savage weather and accomplished very little

The piston-engined chopper sent by the Coast Guard from Alameda proved to be of little benefit, due to high winds and poor visibility, deration of the lift of the rotor at this altitude, and an inability to land in the snow adjoining the snowbound train

“I’m already late for my granddaughter’s recital, by legs have been wrapped in potato sacks for three days, this dingbat in the hoodie has been babbling about God-knows-what the whole time; I’m hungry, I’m cold and now this young man says I have to take my smoke out to the vestibule where it’s four-below-zero. Next trip I’m taking the BUS!”  © SP

Dr. Walter Roehll of Chicago was accompanying his patient to San Francisco, and was the only doctor traveling on the train. There were a group, (4,6?) nurses aboard enroute to a convention in the Bay Area. The SP gave high praise to the significant number of soldiers, sailors and marines aboard, enroute to meet sea transportation to the Korean Conflict for their skills in medicine, survival and a general “can-do” nature. © SP

Jeffry Wise and his mother Orell — where are you now? 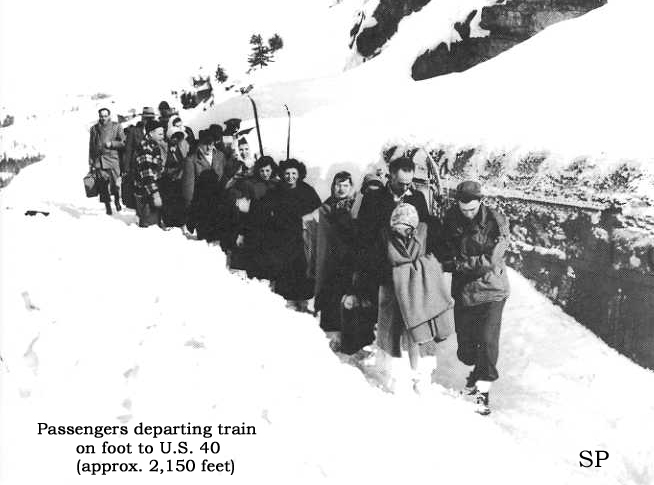 The skies cleared, the winds abated, and SP laborers had stomped out a trail in the snow from the snowbound train to a point on US-40. All but a few (4) passengers walked to the highway and waiting vehicles, assisted with their baggage by the SP. Four passengers were taken by stretcher to the highway. All of their baggage went home with them that afternoon!

The only transportation available in the Norden area were those vehicles that were  already there when US-40 closed a week-and-a-half earlier. Their owners were located and – reports vary – about 18 cars and pickups were pressed into service to haul the 255-or-so people the four-mile distance on the one–lane road, making numerous trips, turning together in the turn areas plowed by the highway department, and taking another group. (As a matter of explanation, the 226-passenger count excluded 19 SP employees on board and a number of people involved in the rescue who got to the train but couldn’t get back to civilization and stayed aboard) 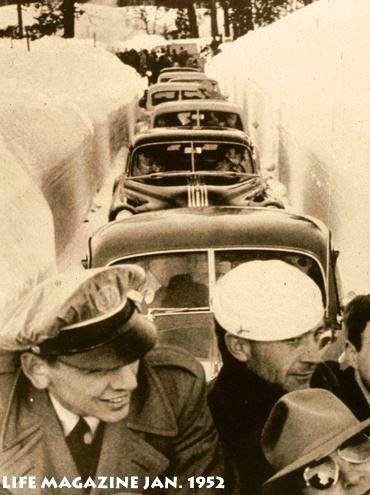 No words are necessary…

The “rescue train” (left) at Nyack Lodge – the SP, weary of having their rolling stock derailed by the snow, located 11 heavyweight Pullman cars which had been sidelined prior to WWII, and tied four large F-7 diesels at either end of this train. It was filled with food, spirits, clothes, blankets and medical supplies. SP plowed the track to Nyack Lodge, the California Department of Highways plowed US 40, which had been closed for 11 days, and the rescue train was spotted at Nyack. Passengers walked some 1,080 feet to the train from the lodge (traveling on I-80 today, their route remains evident where the freeway passes over the railroad tunnel). © SP 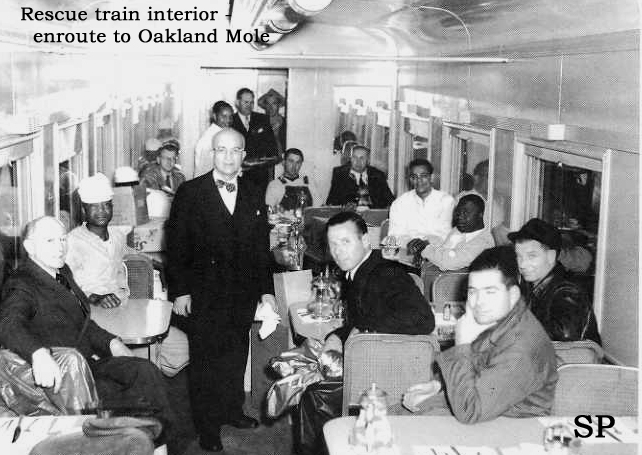 Aboard the rescue train – the passengers, now showered, with a change of clothes, a cocktail and a steak dinner, kicked back on the ride from Nyack Lodge to Oakland. A very few disembarked in Sacramento, but rode all the way to the mole, where many were met by friends or relatives. SP made phone service available, but it was spotty

The Oakland “mole” – the west terminus of SP trains, where the rescue train arrived at 3:40 a.m. on January 17, 1952. A UP ferry boat took the passengers across the Bay to the SP passenger station on Townsend Street on the Embarcadero (postcard) 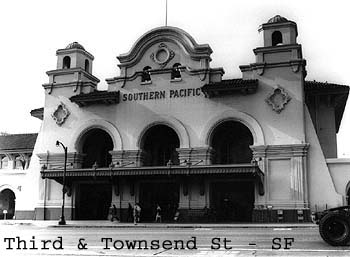 Jay Gold, 31, was an employee of the Pacific Gas & Electric Company working out of Drum, a few miles west of the site. Word of the train’s predicament reached Drum and Gold trailered a Sno-cat as close as possible to the site. He worked virtually non-stop for three days and nights, hauling stuff and people to and from the snowbound train between rounds of blizzards (he was joined by a second Sno-cat donated by Pacific Telephone a day later)> He passed away 31 days after the passengers were rescued. Unknown to but a very few, Jay had a preëxisting cardiac condition.  His family was generously compensated by both the SP Railroad and PG&E, but I have championed, to no avail, an effort to have a short stretch of I-80 below the snowbound train’s location designated in his honor, with appropriate signage for all to see while traversing Donner Summit. (courtesy Gold family)

One thought on “Rarely seen photos of the snowbound SP streamliner, Donner Summit, 1952”