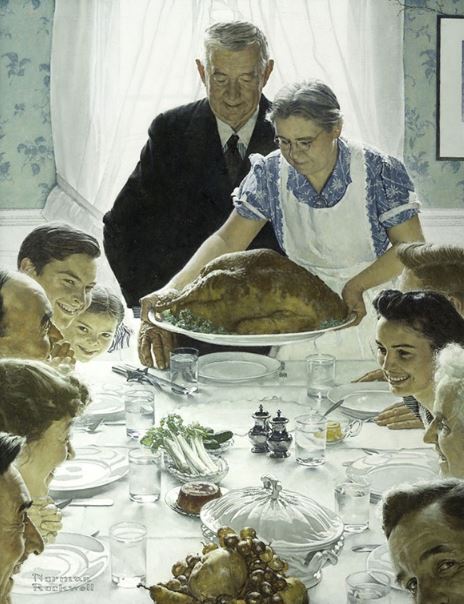 Oh boyoboyoboy – we’re having our first Thanksgiving dinner in Reno since we moved here after the war at our house at 740 Ralston Street. And the best news is that the little red-haired girl is coming, with her parents and grandparents. And her baby brother Mike who like my sister Marilynn is still in a bassinet, unless they get loose somehow. A little birdie tells me that someday Mike will be a dentist and Meri will teach school in Napa for 32 years. But I don’t know that now. Rug-rats, Dad calls them.

Dad’s been working hard on the house. He’s got his friend Mr. Maffi helping him to

convert the coal furnace over to oil. They put an oil tank on a stand that feeds the oil to the furnace by gravity, and while it hasn’t been too cold yet it really helps to get the heat up in a hurry. Dad found a tag on the old furnace that says “1905” so it’s pretty old. But we knew that anyway because the carriage house behind the house had a couple old gigs and axles and wheels in it.

All the neighbors are getting rid of the leaves that are falling off the trees everywhere. Last year, our first in Reno, Dad burned them in the curbside but this year they’re still green and won’t burn too well. Anyway, Mary S. Doten School is closed for Thanksgiving Day and the day after, so I’m going to write about it for my teacher Mrs. Angus to get extra credit against my deportment demerits so I won’t have to stay after school. For a while.

The Thanksgiving dinner is turning in to quite an affair, and a lot of work. Mom is peeling potatoes like crazy and will start soon on the sweet potatoes. The little red-haired girl’s mom is working on the stuffing for the turkey and her grandmother is baking some pies – apple and pumpkin. I got to help clean out a couple pumpkins for that pie. Mr. Thomas, who owns a little ranch south of town on a lane called “Huffaker” brought the turkey over. He’d already cut its head off so it’s in a burlap sack.

The little red-head’s dad made a temporary icebox out of his old Navy footlocker and went to Union Ice Company on the Lincoln Highway just west of Vine Street and got ten pounds of dry ice to keep everything in the footlocker, like the turkey and his mother-in-law’s pies, cold. Dad also went to his friend Mr. Chism’s dairy and got a carton of ice cream – he’s going to start marketing it year-round and would have already but no one has a way to keep it cold.

That seems to be the largest problem in putting together this dinner – all the people in Reno have little tiny boxes in their refrigerators for freezing stuff. If they even have a refrigerator at all – there are a lot of homes that just have iceboxes. So the grocery stores don’t carry much frozen food and there aren’t too many grocery stores anyway. Dad’s  friends the Sewell brothers – Harvey and Abner [whoops – might be Herb. But what does a six-ear old know? (All three were founders of Nevada Bank of Commerce)] – are building a big store – biggest in Reno – on Fifth Street between Fifth Street and the Lincoln 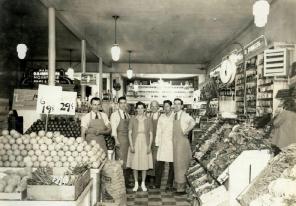 Highway. And a father-and-son, John and Bob Games already have a store downtown [pictured left] but are building a big market on the spot on South Virginia Street where the Shrine Circus used to be held [the antique store in the 1200 block!].  They will go a long way to improving shopping for big dinners like this one. The Gastanaga family already has Eagle Drug and is thinking of offering groceries as Eagle Thrifty. And we have the Twentieth Century Market out South Virginia at the south edge of town by the drive-in. Now all we need are more people with bigger refrigerators, which the American industrial factories can now work on since the war effort is over.

Within about four blocks of 740 Ralston Street, and most other homes in Reno, are maybe four grocery stores – Ralston Market at the bottom of the hill, the Quality Market at Seventh and Washington, the Hilltop Market on 11th Street and the University Market on 10th [Pub ‘n Sub!]. Oh, and the Cottage Grocery on Fifth Street also has a butcher shop which most grocery stores don’t, and the Santa Claus Market on Vine and Sixth is open on Christmas Day.

Anyhow, there’s no shortage of markets, but all are limited in their selection.

Mom says that a lot of groceries could be frozen for a dinner like this. Like the pies they’re making for dinner, the ice cream from Chism’s dairy, even the turkey. She says that someday turkeys will be for sale frozen, and people will have refrigerators big enough to store them. And Dad says he won’t have to go to Union Ice or Brickie Hansen’s market anymore to get ice cubes for the cocktails. Even the whipped cream will come in a can with some kind of pressure, like hair spray and room deodorant will also. Dad says she’s nuts – why would anybody put whipping cream in a can for topping? I just stay out of it. She is a little batty…

Dad’s friend Mr. Conrad is in the grocery business so he’s helping with some of the dinner. His wife Jean will be my third-grade teacher next year. They have a cute little daughter named Carolyn; she’s a couple years older than I but I’ll bet she’ll still be my friend 70 years from now. Getting dinner rolls is kind of tough this time of year; Rauhut’s Bakery carries them but we’re getting ours from Nikki Pistone,

who lives close by on Sierra Street and cooks and people go and pick up what they order – rolls, sometimes other stuff and ravioli – she’s known by all as the best ravioli cook in town next to some lady in a house Halfway between Reno and Sparks. She’s good too.

The little red-headed girl’s dad is getting the wine – he’s a basko, whatever that is, but he has a lot of friends in Little Italy, walking distance from our houses! His friend Mr. Nieri [Aldo] has saved a couple nice bottles of red wine for us. Actually, they’re jugs – everybody who gets wine from Little Italy has to bring their own jugs and they get refilled from the wine the Italian people crush themselves. Dad says the druggist Mr. Ramos is going to start selling wine in real bottles with labels on them, in red, white and blush, which are the three types of wine now being bottled. Mom grew up in Petaluma, a hoot-and-a-holler from a little town called Napa which is the Portuguese capital of America. The Portuguese know wine and how to bottle it and age it and make barrels for it, but the Irish mothers wouldn’t let their daughters date the Portuguese boys. If I heard that once, I heard it a thousand times.

We’re having some guests – Dad is going to walk to St. Mary’s Hospital down the street and bring a couple of the Dominican sisters up the hill to join us for dinner. Mom knows one of them from Petaluma, which is close to San Rafael, which is the head-shed of the Dominican Order, that started St. Mary’s Hospital. Actually they started St. Mary’s School for Girls which was converted to a hospital in 1918 when Reno needed a hospital more than it needed a girls’ school. I’ll have to hear that story all night one more time. But it will be nice to see them. Last year, when we like many Reno people had ham for Thanksgiving because Dad couldn’t find a turkey, my mother’s Aunt Lola, an Irish Catholic nun loose in the Maryknoll Order came on the train from that order’s HQ in Dubuque, Iowa and she and Dad had too much of Mr. Nieri’s red wine, but we won’t  write about that dinner.

Anyhoo, it’s going to be a fine night indeed on Ralston Street. Dad’s getting out a bunch of his records to put on the changer and I asked him to include Peter and the Wolf. The takeaway for the whole article is of the way things are today in 1948, as compared to the way they might be 70 years later, in terms of putting a dinner together without what I guess will be called a big refrigerator with a huge freezer section, big markets with every grocery item known to man prepackaged or frozen or available somehow, and also some of the cooking tools available – microwave ovens, and range/ovens with such great capacity and alternate cooking temperatures. Think about that as you enjoy your dinner this week!

Happy Thanksgiving to all…

A note about the graphic: In 1941, FDR addressed congress with a goal to revolve around the so-called Four Freedoms —”Freedom of Speech,” ‘Freedom of Worship,” “Freedom from Want,” and “Freedom From Fear.”

Illustrator Norman Rockwell embodied those freedoms in a series of four covers for the Saturday Evening Post; the “Freedom from Want” was published five years ago just prior to Thanksgiving 1943 and immediately became the iconic representation of the holiday.

It is my understanding that Rockwell and the Post released the copyright on the four covers. The original covers are currently on display in the Henry Ford Museum in Dearborn, Michigan