Last weekend I took off on my Schwinn over Highway 40, to visit my kids and grandkids in San Mateo, a bit south of Mills Field airport near San Francisco. And the fact that the six-year-old kid is pedaling to meet his son, daughter-in-law and their two pre-teen daughters – his granddaughters – tells the reader just how screwed up the chronology of this little story is going to have to get to make any sense at all!

So – that said – I packed up some peanut butter & jelly sandwiches and Oreos to keep body and soul together, and took off westward along Highway 40 to get there. Pedaling down the road, it dawned on me that this would be a good adventure to write about, so I started taking some notes in my little spiral notebook as I stopped to take each breather. And I soon realized that there’s a whole lot to write about, whether a six-year-old kid is actually driving a Honda (they make cars in Japan? MacArthur just signed a truce with the Japanese aboard the battleship Missouri a few years ago. Now they’re building cars?) Or keeping notes in a spiral notebook or with a digital dictating machine (built near the Honda plant!) [a vague reference to my actually driving a Honda on the trip; the point pretty-well lost.]

Thus along I go, taking lots of notes of stuff that needs to be written up and some

pictures with my Brownie Hawkeye camera. And the sheer volume of notes is growing. I make a decision: I’m going to target one or two things I see along the way in 1950 and write about them, and if anyone from Reno and Sparks cares about another trip to San Francisco, I’ll go back another time and get some more of the notes I made.

The guy at the A-frame bug station down along the Truckee River asked me if I had any fruit or stuff, I told him just a couple PB&J sandwiches. Once I wrote a whole column about the San Francisco Men’s Fishing Club down the hill on the Truckee that’s been there since 1903, and even talked to their lady in SF where the club has run from for so many years. The UP Railroad built the club to build up traffic from SF to the Truckee area. But at the last minute I was asked not to publish the column, so I didn’t. But someday I might. 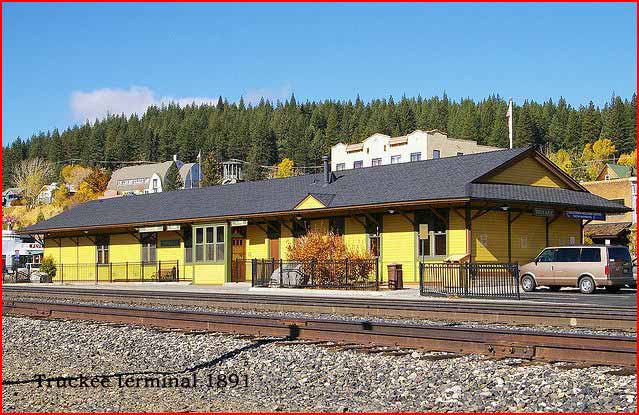 sandwiches. A couple trains go by in both directions, and it’s obvious that the diesel electric engines are taking over – a few trains pass with steam cab-forward 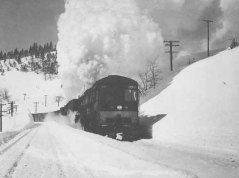 locomotives, but they’re really dinosaurs – the last one went through Reno on a revenue run a year ago, but they’re still the loco of choice, helping the diesels with the heavier trains. My goal is to get through Truckee along Highway 40, then ride my bike up Donner Pass, over the Rainbow Bridge on the highway, get a picture of that refrigerated trailer that went over the guardrail  and stayed at the bottom of that canyon for so many years! Dad always pointed it out when we drove down to Petaluma to see Grandma Frankie. But what I want to get to by daylight is the Southern Pacific roundhouse at Norden. I’ll make it OK.

The hill from Donner Lake up to Soda Springs is a grind, but I pedal it anyway, then ride along the road that goes to Norden. There’s a lot going on in that neck of the woods, but most people don’t ever see it because they stay on the main road. There’s talk that someday there may be a “freeway” alongside Donner Pass and Highway 40, that will cross the summit at a lower altitude. But I probably won’t live long enough to see that! 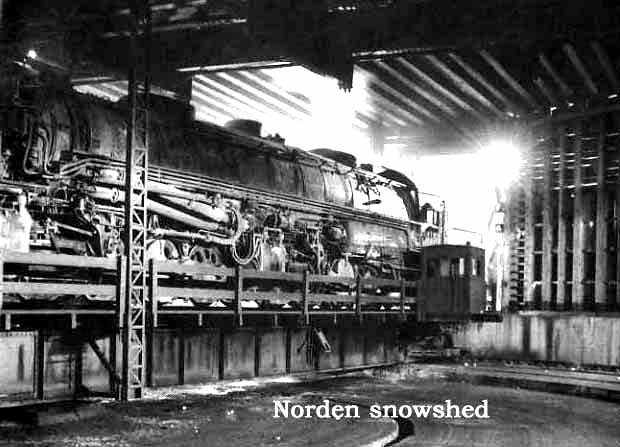 I make it to the roundhouse, and there’s a cab-forward parked in it, being turned around to follow a train back to Truckee, acting as a brake. The “Mallets,” which they’re not but everybody calls them Mallet anyway, are still in frequent use on Donner Pass, but I was lucky to get to see one being turned on the turntable. I got a picture of it.

The second thing I want to write about hasn’t happened yet, nor will it for another two years, when the SP’s “City of San Francisco” passenger streamliner got snowbound four miles west of here in 1952. I’ve written about it before here, but 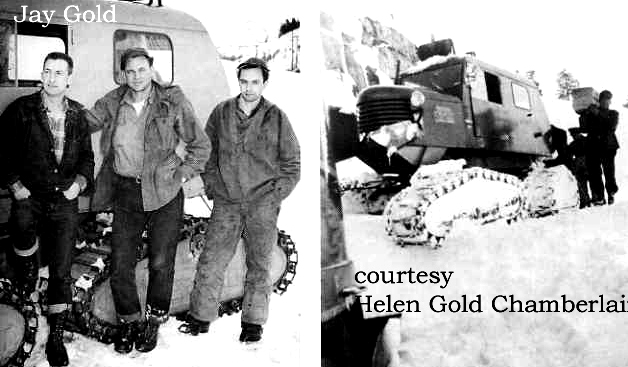 there’s one story I keep trying to get told, the story of Jay Gold, a thirty-something employee of Pacific Gas & Electric, that had headquarters in Drum, a little to the west. Gold was the operator of PG&E’s Tucker Sno-Cats© when there were darn few of the machines in the Sierra. Jay heard about the stuck train, and spent the next four days taking his Sno-Cat back and forth, up and down the mountain assisting the rescuers and medical people tending to the people on the train. He worked about 18 hours each day, three of those days in blinding blizzards.

The people finally got off the train and to Nyack, long story (I put a link to that saga at the end of this piece). No passengers were 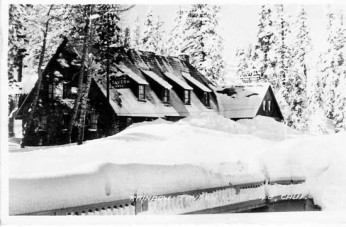 injured. Two SP engineers in a rotary snowplow were scalded to death when the plow overturned.

And Jay Gold died, a month after the rescue was over. Cardiac arrest. He knew, as did very few others, that he had a heart condition, prior to the rescue.

He worked himself to death, literally. His widow was entreated to a trust fund by the State of California, the Southern Pacific Railroad, and PG&E. But – to my knowledge, there exists no lasting tribute, plaque or remembrance of the man. And I’ve looked, and written of him in the past. To no avail.

It’s been over 60 years, but I’d still like to see Jay’s name somewhere around the scene of the stranded streamliner, or Truckee. Maybe on the train station which has become a popular tourist stop.

Funny, all this coming from a six-year-old writer……..

OK, I’m pedaling down Highway 40 again now, to the last stop on this visit with you and for my second PB&J and the Oreos. We’re going to the place Jay worked, to the power plant and reservoir that many grownups get a big kick out of calling “dumb 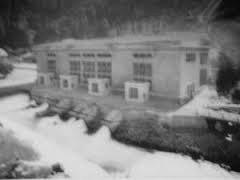 foreplay,” whatever that means that gets everybody yukking it up. The place was there a year or two before the UP railroad went by it, and the owners put up their own railroad to the UP trackage to help build it. It’s actually known as “Drum Forebay,” and is now a major operation of PG&E, and as a matter of fact is the point at which PG&E sells and buys power to NV Energy and other utilities. The forebay – reservoir – was named for Frank Drum, an early California power executive who was instrumental in pulling a number of entities together into mighty PG&E.

And with that, I’m going to sign off. I’ve a lot more notes and one of these days I’ll write again of my Ralston Street-to-San Mateo adventure!

I’m dedicating this column to my 1949 next-door-neighbor who rides with me on many of these adventures, Henry Philcox. Hank is a half-a-year older and a school 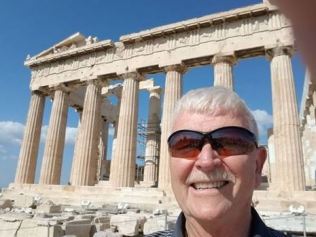 grade higher than I, and now lives on the southeast coast. I saw him when he was in Reno for the Reno High School Class of 1958 60-year Reunion last month, from which he left for his home not knowing whether Hurricane Florence had spared it.

Hank will be back riding along with us soon…!

The six-year old-kid took the liberty of adding Joan Anglin’s comment below – it’s too good not to get out to the world:

“I remember driving from San Francisco to Reno in a snowstorm. We were just creeping along, and everybody was behaving themselves, except for the people in front of us who kept flashing their high beams at the Truck in front of them. Nowhere to pull over, so we just kept on going. Finally there was a passing lane, and the truck pulled over slightly and then curved back and blocked the lane.

“The driver got out, walked to the back of the truck with a baseball bat and without a word broke both headlights of the car behind him. He got back into his truck pulled over and let everybody pass. The car without lights pulled over behind the truck and that is the end of the tale as far as I know. I wasn’t on a bike either, but in the 1947 Packard that was Jack Reimers pride and joy”

Ol’ RHS buddy Dee Garrett just checked in; here’s what he had to say:
“Way back in the late 40’s myself & neighbor Mat Conlin ventured out on a bike ride to Verdi.

“I am sure we had our peanut & jelly sandwich as well as a package of hostess cupcakes for a snack.

“With our one-speed bikes either from Oden Cycle Shop or Western Auto Supply we ventured west thinking that the trip would be a breeze. It kind of was until we got to that long upgrade road near Verdi that crosses the river and our legs & one speed bikes were pooped out. Oh yes, we were maybe 12 & 13 years old.

“Not having cell phones and knowing smoke signals will not be seen in Reno we got a message somehow to Mat’s mom to came and rescued us & she did.

“Lesson learned from this, wait until the better & lightweight bikes are built and that we have grown up & had better sense .

“So that is my take on a bike ride to Verdi.

“Keep up the great stories no matter how old you are.”

The location of the stranded “City of San Francisco” here