Well, we’re coming up on the first anniversary of me writing down about my adventures from 740 Ralston Street – I started on Super Bowl Sunday in 2017 and here it is almost a year later; I’m seven years old now, a year older and wiser; my little sister Marilynn is out of the bassinet into the playpen. The little red-haired girl still lives next door, now she has a baby brother who will grow up to be a dentist. Dad has his own office now, away from A Street in Sparks to 119 East Liberty Street, across the street from Southside School.

The war’s been over for over a year now, a lot of my friends’ dads are coming home, the merchants’ shelves are starting to get stuff on them, and the Army’s vehicle repair center behind Washoe County Hospital is being dismantled. Quonset huts are going all over town, we have one at Mary S. Doten and there’s a barracks at the corner of Tenth and Ralston Street a couple blocks from my house, by my buddy Don Hartman’s house. 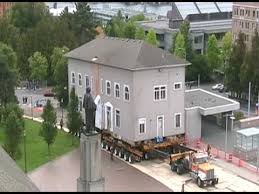 I’m riding my bike further away from the house than I’m supposed to, all the way down to California Avenue where dad is going to build a new office, I’ll write about that someday. But today, and it’s actually 1951, there’s a lot of activity on California Avenue where Humboldt Street comes in, by Powell’s Drug Store that the Lee family built for their car-leasing company upstairs. A crew of men has pulled away all the foundation and rubble under an old white two-story house, pretty fancy place at that. The men are from the Bevilaqua family, who moves houses all over Reno. Dad says it’s not unusual for someone to sell the lot where a house is, and take the house to a new place in town or Sparks. 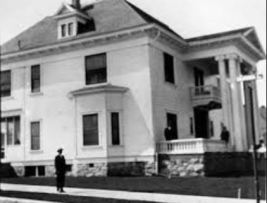 The old house they’ve got up on timbers now was a Reno mansion, which looks a lot like Mrs. Levy’s house down the street at Granite Street, which would later become a bookstore named Sundance or something, but I don’t know about that yet. Anyway this big house is up on blocks and the Bevilaquas are putting wheels under the timbers. I heard a guy say that tomorrow they’re going to tow the house out by that new lake south of town, Virginia Lake. Boyoboy, I’m going to get skinned tonight but I’m coming back down tomorrow and watch them move it if I haven’t been grounded.

Aha! I told Mom I was at the Christian Science Reading Room on First Street all 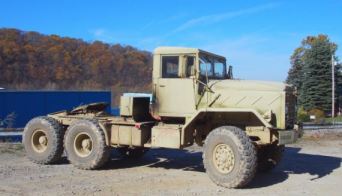 afternoon, so I’m a free kid still. Down the hill I go to the river, to the new Chestnut Street bridge and across the Truckee, up the hill on Belmont to California Avenue. Then down toward town where all the men are back. A great big truck is sitting pointing down Humboldt Street, with an iron towbar hooked to the house. They’re getting ready to move the house!

I learned that the place is being moved because a pharmacist named Mr. Ramos, who has a drug store at Second and Virginia Streets downtown, is building a new drug store on the site of the house. He’s going to live upstairs in the drug store. The land next door to the east, to Hill Street, was going to be leased to Texaco for a service station operated by a friend of dad’s named Jess Brooks. His daughter Patsy is a real looker but I’m too young to look. (That, however, will pass.)

They start up the big truck. Both of Reno’s motorcycle cops are on the street and there’s a bunch of guys from the power company and Bell Teleephone on the roof of the house with poles. They will ride on the house while it goes out Plumas Street, and lift the power and phone lines to allow the house to pass under (the brick chimney has been taken off the house). They’ve moved some of the wires and trimmed some trees back, and planked up Plumas Street where the house will pass over the Cochran Ditch. The house is heavy and might collapse the street.

The ugly old truck starts to pull against the drawbar, and make a huge racket and 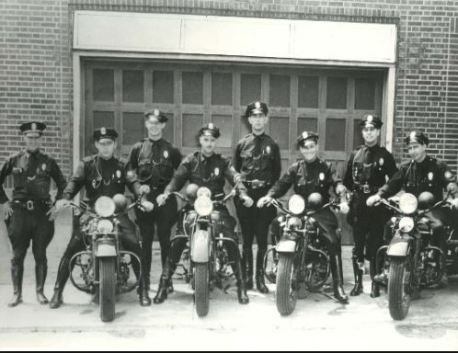 pumps black smoke from its two exhaust pipes. It shakes and the tires on the two back axles slip a little bit but the truck keeps pulling. All of a sudden the house moves and starts to rise where the wheels under it hit the little uphill grade from the basement, to California Avenue. It keeps pulling, roaring and smoking and eventually all the tires are on the pavement and the truck starts to turn to the left, toward Plumas Street. The motor cops stop the traffic. All the movers and the people who work in the offices cheer, even Mr. Hardy, in the big house next door across the alley, is watching from his front porch of what we now call the Hardy House. And Mom is really going to be mad at me for writing “cops!”

But what else is new. The truck and the house reach Plumas Street and it becomes clear how much the house being moved looks like the Levy Mansion. Granite Street doesn’t line up with Plumas yet. In fact it wouldn’t even be called “Sierra Street” south of the river for a few more years. The truck swung wide to the left then started a right turn, to go south on Plumas. The men on the roof lifted wires and walked to the “back” of the house, holding the wire and letting it fall behind the house as it moved. They were pretty good at it, as there were a lot of houses being moved around Reno and Sparks. But not as big as this one.

I rode my bike along behind it. A few other guys rode along too, and a photographer from the Nevada State Journal with one of those big black Press Graphic cameras. There would be a picture of it in that paper in the morning.

We traveled south on Plumas Street, and passed slowly by Billinghurst Junior High School. In a couple of months the new Reno High School would open at the bottom of the California Avenue hill and a lot of kids will go there. We passed by my friends Ty and Bill Cobb’s house at Martin Street, across from Billinghurst.

We got to Mt. Rose Street, beyond the planks over the Cochran Ditch where all the men were worried about the weight, but the planks held. Mt. Rose was the south city limits of Reno and there wasn’t much beyond there – just a few houses. Somebody said that Plumb Lane, with a “b” on the end of Plumb because it wasn’t named after a Plum but a family, was going to be extended eastward from Arlington to South Virginia, and then all the way to Hubbard Field, our airport.

HA! I thought. I may not live long enough to see Plumb Lane go all the way to Hubbard Field!

the light off, so I’m going to quit writing tonight. Within the next week I’ll tell you about getting the house all the way out Plumas Street where it was going to be placed, and we’ll poke around Virginia Lake a little – it’s a fun place.

So – I’ll leave you here – the house has been moved as far as Plumas and Mt. Rose Street and it will stay there all night. Come back in a while and we’ll pedal back to watch them put the house in it’s new home by Virginia Lake!