…how it all began

I’m back writing again, sure would like to learn how to “type” on a machine like a lady at our school has. School’s been going for a couple weeks now at Mary S. Doten elementary school a couple blocks from my house on Ralston Street.

The weather is really nice now, Dad says it’s the best time of year in Reno. Me and the little red-haired-girl next door have been playing in the park across the street. And there’s been a lot to see, big trucks going all over the place towing steel buildings around. Today they put one with a round roof on our playground at school. It’s called a “Quonset hut” – I think I’m spelling it right.

Dad says they’re all coming from a place downtown by Washoe General Hospital, an Army base called Sierra Army Depot. Apparently it was built by the Army right after World War II started, a few weeks after I was born. It was on a bunch of old meadows and fields between the hospital and the Truckee River. It grew fast until 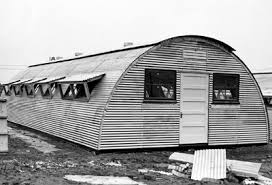 there were over 60 buildings there, mostly building made somewhere else out of steel and hauled in and bolted together. There were a lot of these Quonset huts like the one Mr. Bevelaqua and his two sons are hauling around on big trucks. Four of them wound up on East Fourth Street as a market, later it would be a good store for Twin City Surplus [below on the left]. There were square buildings also that got moved around Reno. Dad says if you drive east on the Lincoln Highway you can see a lot of them. 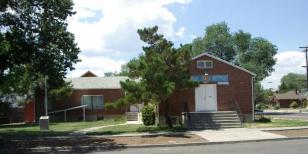 the war, and they would come to Reno on railcars. A lot of people worked there. They lived in a little village up east of the University of Nevada in little houses set in a circle that would be there 80 years later off Highland Avenue. Over 6,000 military trucks and tanks and stuff were hauled in and out of that base by the little brick hospital. After the war was was over last year the Army started to take it down immediately, and that’s why all these buildings are being moved every day. Two “barracks” – buildings where soldiers lived – were hauled to Ninth Street north of our home on Ralston Street to be a veterans’ center – Darrell Dunkel Hall they called it [above right]. That’s a funny name: “Dunkel”! They hauled a couple more to the corner of University Terrace and Washington Street for an apartment house, and one cut in half to the center of Whitaker Park for the kids to use for storing stuff and doing projects at the park. Apparently a lot of Reno parks got other halves of barracks. If one is a “half” why are two of them “halves” and not “halfs”? I’m having trouble learning how to write. So I’ll probably make a good reporter someday because my language is so crappy (I’m not supposed to say that word.)

One barracks went up to Little Italy that I wrote you about a month ago. It was for the Italian men that Mr. Ginocchio brought from Italy to work in the iron works on Chestnut Street. These little buildings went all over Reno and Sparks, all five of the elementary schools got one for extra classroom space, the University got quite a few of them. The hospital got a couple of the Quonset huts. In later years their first “computer,” whatever that is, would go in one of them. But this is only 1946 and I don’t know anything about “computers.”

Eventually, and it didn’t take long, all of the Army buildings on East Second Street were hauled to Reno and Sparks, and only two big Quonset huts were left – one would stay until at least 2017 beyond the hospital on the south side of East Second Street. That’s the last one.

Dad said the gates into the place were on East Second Street at Kirman Avenue, and the fencing ran all the way to a fence on the Kietzke farm. And the Army did a pretty good job of keeping it secret. There were no stories in the newspapers about it nor any photographs of it. It was a secret base right here in Reno, that 6,000 vehicles went through, but few knew anything about it.

And now the Bevelaquas are hauling it, building-by-building, all over! Of over 60 buildings, I’ve heard that over 45 of them were still around Reno and Sparks in 2000. But this is only 1946 so I won’t write about it. I can keep a secret also.

Aside from all that, life is good here on Ralston Street. The fireworks at Mackay Stadium are over for the summer but now there are football games. Dad likes

football and we’ve walked to a few games. Everybody is excited because the Wolf Pack’s new coach Jim Aiken is building a great team and St. Mary’s Gaels are coming to town. I got to go to the radio station last week and met Mr. Stoddard and Mr. Cafferty – he told me I could come in early some morning and listen to him when he went on the radio as “Cactus Tom.” I’ll tell you all about that soon.

There’s really a lot of things to write about coming up. Some new “diesel” train engines are starting to come through town and a new hotel is almost done right in the middle of downtown Reno built by a rancher named Mapes and his son, who Dad thinks is a hotshot punk. But Dad says the hotel will be the highest building in Nevada and will stay open for hundreds of years.

In my crystal ball, I can see Dad working on a giant haylift loading airplanes for cattle next winter in the snow, and a guy who owns a club downtown named Fitzgerald getting shot up by the railroad tracks. I’ll write about that stuff also. But now the little red-haired-girl next door wants to go across the street and swing in the park so I’m done today. See you soon….