How all this began…

School starts but it’s still summer in my new town of Reno, and Dad wants to go to the stadium at the university by our house on Ralston Street and watch the fireworks! They’re put on every Friday all summer by a night club downtown owned by a guy named Harold, so it’s called “Harold’s Club.” In a few years he’d quit putting that little comma up high between the “d” and the “s” but that wouldn’t happen until 1949.

It’s Friday, so dad and I are walking down University Terrace toward the university. Mom’s staying home with my sister Merilynn, she’s still in a bassinet. We walk past my friend Bill and Margaret Eddleman’s house and then around a big curve. There’s a rock wall on the south side of the street and no sidewalk. Just below that wall the Orr Ditch is flowing full. The wall was built a few years ago as a government project to keep men working after something called the “depression,” when everybody was out of work. I heard that they also built a big lake with an island in the southwest corner of Reno by the old airport that was turned into a golf course. We’re going to go to there someday. I’ll tell you about that when we get there. I’ll write about it.

But tonight is fireworks, and they are free to watch. We walk past Mr. Goodwin’s house, a friend of Dad’s who owns the Kentile floor covering business in Reno. He’s the president of Reno’s banjo band, and there’s about 20 guys out in his front yard playing banjos and we can hear them from around the corner.

We get to Sierra Street and cross it and walk down to Virginia Street. It’s the main highway to a town called Susanville. We keep walking to University Street, the next street, and go through some big granite pillars with dates on them, a gift to the university when every graduating class donated some landmark with their class’ date on it. Then we turn left and go up the hill into the university itself.

There’s a couple of cannon at the top of the hill, and two twin buildings, called Morrill and Stewart Hall. We keep walking up past a big grassy park about as big as a couple blocks downtown. Dad said it’s called the “Quad,” or Quadrangle. Dad says

the Quad copied a design by Thomas Jefferson for the University of Virginia’s campus. All around it are a bunch of old brick buildings where kids go to learn something. There’s a statue of a guy named John Mackay at one end of the Quad, put there by his son Clarence who also paid for the stadium that we’re going to, so they named it after Clarence when it was built in 1908. Then we walk past a building called Lincoln Hall where a lot of guys live.

Then we cross a dirt parking lot to the stadium – Mackay Stadium – and go in. It’s all concrete steps like seats on the west side where everybody sits. And there’s no lights, so it’s starting to get pretty dark. Across the stadium is another grandstand for the kids that go to the university to sit on. Behind that, on the left side of the picture, is a “fieldhouse” where all the lockers and showers are for the ballplayers. It’s getting dark and everybody is excited about the fireworks starting to begin.

There’s a loudspeaker system that’s pretty crackly but it works, and a guy in a white

suit gets out of blue Buick woody station wagon with bull horns across the roof, and he starts talking in the middle of the field. And here my nose is getting long like Pinocchio’s because this is supposed to be 1946 but the Buick is a 1949 so I must be fibbing, but hey, I’m only six years old.

The guy in the white suit and Stetson hat is Mr. Smith himself – Harold – and he welcomes everybody to the fireworks show. Then 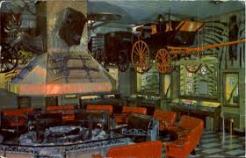 they play some music by some guys called the “Sons of the Pioneers” over the loudspeakers and make it pretty plain that he wants everybody to come to Harolds Club soon. Even the kids can go, because he shuts off gaming in the “Roaring Camp,” the name of his western museum, every Saturday morning between ten in the morning and noon, just so us kids can go in the museum. We can’t go other times because there’s people gambling. 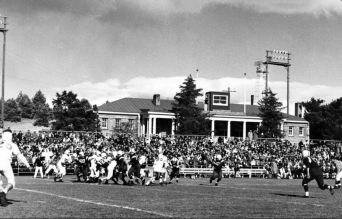 The fireworks start soon and they’re really neat. It seems like half the town of Reno and Sparks is there in the stands on both sides of the field. The stadium is pretty full, and it holds almost 2,800 people on the west side seats. A lot of people brought blankets and are sitting on the grass on the football field. And they’re all “ooh”ing and “ahh”ing with the fireworks that go on for about a half-hour. They’ve been going on all summer, and tonight is the last night.

We get a Coke at the stand that some bunch of guys, Dad’s friends, run, the “Lions” or “Tigers” or something like that. I’d get to know them pretty well in years to come, because Dad got involved a year later in the “Friendship Train” collecting stuff to send to a town called Berlin somewhere in Europe that was blockaded by another country and the people were cold and starving. Two brothers named Sewell built a grocery store down the street, and loaned it to Dad and his friends to collect groceries and clothes and stuff. But that’s a year away so I can’t write about it yet. I’ve just got to grow up faster so I can write about the Friendship Train and the Lake Street Fire and some other cool stuff that hasn’t happened yet.

But, tonight’s tonight, 1946; we’re in Mackay Stadium and about to walk back home to Ralston Street.

(By the way, Dad says if I’m going to steal pictures I’d better say where I got them; some of the pictures, of old Mackay Stadium, are from the University’s Special Collections archives. I don’t know where they got them…)