Go to the first tale in this adventure

Well, we’ve been here in Reno for a couple weeks; school will be starting soon down the hill at Mary S. Doten. Dad got a job as a real estate man working for an agent named Charles H. Skipper, whose office is in Sparks, a little town just east of Reno. Dad said he thinks it will grow pretty fast with a guy named George Probasco, building houses that the guys getting out of the service will be buying.

Dad took me out to Sparks this Saturday morning. We went out the Lincoln Highway, past a lot of old pre-war businesses and some “auto courts” that I’ll tell you all about one of these times when I’m writing again. But this morning I start our walk at his office, in a little tiny house on A Street. The main drag through Sparks is the Lincoln Highway, but in Sparks it’s called “B Street.” Skipper’s office is on “A Street,” south of the highway and on the south side of a pretty little park called the “Reserve” by the Union Pacific Railroad when they moved to Sparks in 1903. It was reserved for a park for employees of the railroad, and had sat there for 40 years, grassy with nice walkways, early light fixtures and a small eight-sided “Queen Anne” bandbox on the east end of the Reserve  (pictured above). It started at about 12th Street which in time to come would be a casino called the Nugget, and went from there east a long ways, toward what I’d learn in 1955 would be a bunch of great big tanks to hold oil and gas and stuff, starting about 4th Street. Getting myself adjusted, I figured out that 8th Street would become known as “Pyramid Way” because it went to Pyramid Lake.

The railroad’s property was fenced, on a line which started south of dad’s new office on A Street. There were a couple of gates, the big one that most of the employees used was at the foot of 8th Street, Pyramid Way. Just beyond that gate was the railroad’s “roundhouse,” a big building to turn locomotives with. I didn’t know it that morning but in a few years it would be torn down and its bricks used all over Reno and Sparks. There was another big building to the east of the roundhouse, where the railroad worked on its locomotives. During the war, which was just ended, a wing was added to the east of that brick building. There were big locomotives everywhere, with silver fronts and their smokestacks in the back, which was different than what I saw in El Cerrito when we lived there. And you could hear (and smell!) them from blocks away from the railyard.

I met Mr. Shelly that morning with dad. He was a neat guy who owned a hardware store a little ways up Pyramid Way by the airport. He knew all about the railroads, and told me that there was over 30 miles of side tracks in the Sparks railroad yard. The ground had been built up in 1903  before the railroad laid all that track, with dirt that had been brought in from a little place west of Reno by a street that would later be called Stoker. But this was 1946, so I didn’t know that street’s name then. He told me that when the railroad opened their railyard they brought in over 1,000 tons of coal and made a big pile of it to use in their engines

The engines were built for the snow sheds west of town, with the engineers’ seats in the front and air pumped into the cab, to keep the smoke out when they were in the tunnels on the big mountain west of Reno. Boy, I can’t wait to go up and see those snow sheds and tunnels! I’ll write about it here when I do! The railroad bought a lot of those locomotives. Mr. Shelly told me that at one time over a hundred of them were built by Baldwin Locomotive in Philadelphia and towed to Sparks. He gave dad and I a ride in his pickup to the far end of the railyard, where we went over 14 sets of tracks, I counted ‘em, on Stanford Way to cross the yard. The street was named for Mr. Stanford, one of the railroad’s owners. And it was later closed to cars. One day in the mid-1950s they would start building those tanks, but we didn’t know that then. 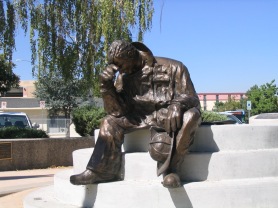 Sparks was a fun town to walk around in while dad worked selling houses. I’d go often with him on Saturdays. The Reserve got a lot of use with kids like me during the day and in the evening they’d have band concerts and dances in the little bandbox. There was a library across B Street that took good care of kids. On a sad note I remember a procession one morning with firemen marching slowly alongside Sparks Fire Department’s pumper truck. All its hoses were removed and a casket with a flag over it was in the hose bay. Dad said it was for the Sparks fire chief, who died fighting a fire in Reno at the Greyhound bus station on Lake Street. That was August 1948, and I think everybody in Sparks and many from Reno were on the lawn at the Reserve. That really stuck in my mind for a long time. There’s a memorial statue now for fallen firemen on Pyramid Way.

There were some nice stores on the north side of B Street. One all us kids liked was the 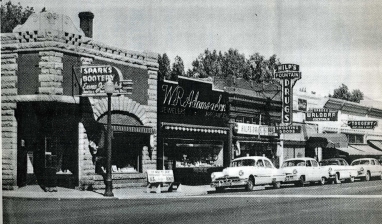 Sparks Bootery, where you could stand on a gadget and see your feet and all the bones and stuff inside your shoes, in a weird green color that looked right through your shoes! Another neat store was a friend of dad’s, Mr. Adams, who was the official watch repair guy for the railroad. He took care of all the railroaders, who had to own a certain kind of watch, and have it inspected each year. He had a big board full of pocket watches that he’d loan to the engineers and conductors while their own watch was being tested. I got lucky and got to have one  of those old “loaners” in later life.

Well, dad’s calling me now across the park so I’m going to go. We’ll meet again soon – there’s a lot more places to walk in Reno and school will be starting soon and I’ll be off to kindergarten! Maybe I’ll be a better writer then, come back and we’ll see……