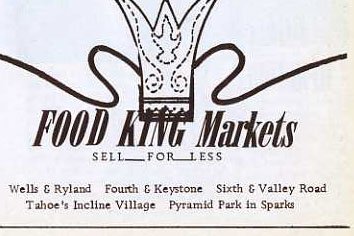 A new/old face appeared at the Seven Ayem Senior Moment Krispy Crème BS & Kaffeeklatch early this week.  Mike Sommers had returned to Reno for the Reno High all-school reunion next Sunday – his first trip “home” of any duration since leaving for a 35-year teaching career in Garrison Keillor country.  He had already covered more ground and seen more old friends than I see in a year, and his insights into our valley were thought provoking.  Always looking for a column idea, I put his questions in quotation marks and our responses in open text.

“When did the MGM become the Hilton?”  Right after it quit being Bally’s – come back next year and it’ll be a big condominium [Grand Sierra Resort]. “I saw where they’re tearing down the Sparks Theater this week – we used to go there to meet all the Sparks High chicks – how can they do that?”  Right, like the Majestic and the Granada theaters – no more. “I miss a chili-cheese omelet at Landrum’s.”  Take your car title there for a loan, seven stools to serve you.  “And the Turf Club with the trumpeter on the roof?  Where do you go for pastrami sandwiches?”  The building got trenched.  Try the Coney Island for a great pastrami. (Our trench, or Trench, capitalized occasionally lately, blew Mike’s mind.  [That’s not the half of it; try telling an intelligent person from somewhere else about STAR bonds! We didn’t even go there…] “What’s wrong with train whistles and a car getting pushed sideways a block occasionally?  We grew up with that.”

“I haven’t heard any Air Guard 101s.  Are they overseas?”  The Guard parked the

Voodoos for RF-4s in 1976, sent those to the boneyard in Arizona and have herded C-130s around since.  “I came in from Stead and saw a great big jailhouse on, what, Parr Boulevard?  Don’t they still have a jail on the top floor of the police station on East Second Street?”  Nope, we’ve got more bad guys now than we did 40 years ago. Funny how we all remember that penthouse on East Second Street.

“I went to see our ol’buddy [so-and-so] in his law office, out somewhere on the end of Kietzke Lane in a complex I didn’t even know where I was.  Wasn’t the conventional wisdom that attorneys all had to be walking-distance from the court house?”  That happened like Topsy – one day it seems most of the bigger firms had bailed downtown in favor of the newer buildings with decent parking.  “I went by Moana Lane and South Virginia and got lost – no Sierra Pacific building.”  Progress – now they’re out south of DeLucci Lane by Home Depot. And they’re not Sierra Pacific anymore, either.  “There’s a Home Depot that far south?  Nawww…”  That ain’t the half of it – there’s a new one even further out south by Damonte Ranch.  “I meant to ask about that – wasn’t Mimi’s Hideaway on Del Monte Lane?  What happened to that?”  Changed it to “Neil Road”; too much confusion with “Damonte” two off-ramps south.  “Why didn’t the Highway Department just use another name for Damonte from the git-go?”  Welcome back to 2005 Reno, Mike. If you like that, you’ll love Zolezzi Lane now; too bad the Texans building Arrowcreek didn’t. Most of our town, you see, is for sale (we didn’t know about the firehouse yet…)

“I was out in Sparks, coming back from a mini-city called Wingfield Springs.  That old pit you could see from the freeway is beautiful.”  Hats off to the City of Sparks – they did the Sparks Marina right, as Sparks does most else that they tackle, thank [retired] City Manager Shaun Carey.  “And that beautiful old S.P locomotive shop – can’t they try to save that?”  Whoever they is, they is trying.  Last we heard the City of Sparks and Q&D Construction – you remember our old classmate, Norm Dianda, the “D” of Q&D? – were working on a joint venture with Union Pacific Railroad if everyone can get their plates clean enough to pursue it.  (“Q” was the late Babe Quadrio.) [Dunno about that one in the present economy. Hope springs eternal.}

“Weinstock’s at Park Lane?”  Refer back to the Sparks, Majestic and Granada theater yak – pretty classy-looking theater on the old Weinstock site [becoming known as seagull gulch].  Yecch.   “Answer Man, on Peckham Lane, best hardware store in Reno.  How can the town do without it?”  Refer to Home Depot and Lowe’s.  “Is that bowling stadium downtown really all a bowling alley?”  You’re kidding, right?”  Nope. And at some times it’s actually full of bowlers, with spare time on their hands.  Think about it. But we don’t know; we can’t roll there. We’re just residents.

Wingfield Park – that was iconic with Reno for so many years.   But the rapids are neat too.  Did a flood do that to the dam?”  Actually, a computer designed the rapids, Belmont is Arlington and Wingfield Park, formally Belle Isle, is Barbara Bennett Park, but the kayak course and the swimming hole it created by serendipity, probably did more for getting folks downtown than did the Men’s Club.  Our city did good.

“The University campus has grown.”  Understatement of the year.  “The Bruce Thompson Federal Courthouse.  Is that Jeff’s dad?”  Yup, our classmates Jeff, Judy and Harold, kids of Bruce and Ellen.  Got his own courthouse.  “That black thing on Liberty Street – Close Encounters of the Third Kind leftover?”  The Nevada Museum of Art.  Beautiful on the inside, Mike – I gave him a guest pass.  Knowing him, he’s used it.  Ditto the Harrah Auto Museum – he’ll go there also.  “The city hall in the old FNB building on First and Virginia?  Naww…”    Yeaaahhh.  Have fun parking your pickup in the high-rise garage next door.

Time grew short.  Mike’s insight – of that which we saw over three decades while

he saw condensed into a week’s touring – gave us a new view of our valley.  We agreed to meet at one joint that had survived the racking and wresting of change, Mama Stempeck’s Halfway Club, for lunch.  And Inez didn’t let us down.

Have a dandy week; goodnight from New York, Peter, and God bless America.