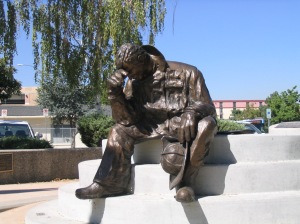 He looked dog-tired.  He sat alone, wearing heavy turnouts, all bunched up at the boots.  His head fell to his chest, left hand resting on his knee holding a helmet with SFD on the crown and his axe on the bench behind him.  A couple of teenagers took turns sitting by him and taking pictures of each other, and then they walked away, leaving him alone again.  I sat down next to him on the bench in a shady setting on Pyramid Way, right behind the Sparks Heritage Museum on Victorian Avenue.

I’d seen him before, while he was directing traffic at a wreck on Rock Boulevard and Prater.  Or maybe dragging a cotton hose into the burning garage at an old house on D Street where the barbecue coals got away from the homeowner, or earlier that same day inspecting an office in the Ribeiro complex on Stanford Way.  Once I saw one of Sparks’ Snorkel trucks in the Disc Drive Scolari’s parking lot, the truck’s operator keeping watch like a quail on a rooftop while his buddies joked around inside the store about whether to get chicken or burgers for their Sunday dinner.  The quail in the Snorkel called them all back to work, pronto, on the walkie-talkie; 15 minutes later they were pulling an unconscious teenager out of an abandoned mine shaft.  Dinner would have to wait this Sunday.  Maybe the guy on the bench was one of the crew on the Snorkel.

But I was sure that he the was a hint of a smile on his countenance, so I might have seem him at a happier time – like when he was cooking at the Fire Prevention Week pancake feed at the main station last October, best in the west, or slinging weenies at the SFD booth on a Thursday night Farmers’ Market on Victorian Square.  Or showing an elementary school kid how to “Stop, Drop and Roll” at the department’s training trailer, or taking a rebuilt bicycle to a needy tyke in west Sparks on Christmas day.

Whoever he was, he was a Sparks firefighter.  Or maybe he was a she – in the turnouts I couldn’t tell.  She might have been the EMT on the Water Rescue Team that fished the kayaker out of the river by old Manogue High School, or the tillerman on the aerial truck when Sparks still had one (and political correctness be damned; in this column the operator steering the back wheels of a hook-and-ladder will always be a tillerman!)  Sure, that’s where I saw her.  Or him.

Or it might have been a while back that I saw this firefighter.  Maybe as far back as 1905 when Sparks’ first firehouse opened at 12th and C Streets, or 1917 when the town got their first motorized apparatus, or in 1960 hosing down Kleppe’s Pond by wintry day so the Railroaders could go ice-skating by night, (the Reno Fire Department did this favor for us Huskies, flooding Idlewild Park and Lake Park in the northwest.)  Sparks’ firefighters have covered Reno’s many times when the RFD got bogged down, like the 1957 Sierra Street fire we read about here a while ago or the 1962 Golden Hotel fire we’ve chronicled in the past few weekends that partially inspired this yarn.  Or when the Galaxy Airlines propjet crashed on South Virginia Street, killing 62 passengers.  Sparks’ apparatus sat in a few Reno firehouses in case anything else got loose on that chilly night in January of 1985.

The Sparks Fire Department aided Reno in the August 1948 Lake Street fire, a nasty one.  Sparks’ chief Frank Hobson was overcome and died a hero’s death rescuing someone in a building.   I vividly remember standing in front of my dad’s office on A Street, watching a flag-draped coffin being escorted down B Street in the hose bay of a Sparks pumper.  Maybe the firefighter sitting next to me was one of the honor guardsmen that slowly marched alongside the pumper.  Or maybe it’s Hobson himself?  Or Fred Steiner Sr., the other Sparks firefighter who died in the line of duty responding to a fire in 1953.  Mutual aid between Reno and Sparks has always been the standard, and firehouse camaraderie transcends the shields of SFD or RFD, or FDNY or PAFD.  This firefighter next to me could have had any one of those stenciled on the helmet in his/her hand.

A few other visitors visited the little park while I sat there.  They saw seven bronze footprints in the walkway leading to the bench.  They studied the life-size bronze figure in a moment of reverence, then took a few pictures and left.

The Sparks Fire Department Monument project was quarterbacked by SFD‘s [now Battalion Chief] Barry Hagen, who, with help from Councilman Phil Salerno and SFD chief Lee Leighton [retired 2004], made a successful request to the Sparks Redevelopment Agency for approval and funding of the project.   Many Sparks businesses donated material, and 95 per cent of the labor was done by off-duty Sparks firefighters.  Hagen contacted Colorado sculptor Gary Coulter, who had created a Fallen Firefighter memorial for Colorado Springs.  That town released the right to replicate their statue, altering only the helmet to read SFD, and the monument was cast.  Coulter passed away from cancer during the casting, so his wife Debbie completed it, and fashioned the axe in the Sparks firefighter’s hand and the brass footprints leading to the bench.  Three flagpoles fly the United States, Nevada, and City of Sparks flags 24 hours a day – and at half-staff on each September 11th.  Bronze plaques descriptive of the department’s history, the dedication of the monument, and the Firefighters’ Prayer are emplaced on the three flagpoles’ bases.

The monument will be dedicated on April 20th – next Saturday [2002] – at 11 a.m.; once again, it’s right behind the Sparks Heritage Museum at Victorian and Pyramid.  Easy parking.

And after the crowd leaves, hang around.  Take a seat next to the firefighter, who might be on the quiet side, but the countenance at rest in this pastoral setting speaks volumes…

[I was proud of this column, and somewhat humbled to learn that it found its way into many firehouses across the country.]