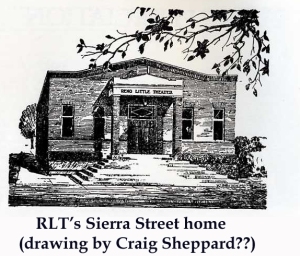 On August 24th of 1894 the Afdeling Waldemar Lodge #12 of the Dania Society held their summer ball at Laughton’s Resort west of Reno, all 120 or so of the members and their attendant brides, and the gala was considered by most accounts as a success, save for Hans Block and Peter Rasmussen winding up with a broken wrist and an amputated thumb, respectively, during a vigorous old-country Danish dance.  But notwithstanding those inconveniences, according to the Reno Evening Gazette a day later, all were looking forward to next year’s party.

This has little to do with this morning’s column.

Time marched on, and the Waldemar Lodge #12, through the beneficence of several local Danes, one recorded as an Andrew Frandsen, were able to  acquire property on North Sierra Street at Seventh Street, and build a handsome brick home for the Dania Society.   In August of 1925 they christened that building, with no further bodily injuries reported in the Gazette.

This has peripheral interest to the column that follows; the name Frandsen being of some interest.

A decade later, a young thespian named Edwin Semenza would fire up a group called the Reno Little Theater, reportedly kicking in bucks a few of his own to make the thing work and offer a play.  On April 15th of 1935, “The Three-Cornered Moon” opened with an all-star cast in the Frandsen Education Building at the University of Nevada (that building named for Peter Frandsen, nephew to Andrew and another icon in the early local Danish community.)  The play was an instant hit with the local townsfolk, and the new little theater’s offerings continued on a regular basis – three or four first-rate, straight-from-Broadway offerings a year – for six decades to follow.

The little theater’s productions soon moved to the State Building downtown – on a personal note I watched “42nd Street” last Sunday and judge it the best show I’ve ever seen in Reno, and I’ve seen a bunch – at the Pioneer Theater, or Pioneer Center for the Performing Arts or whatever the cognoscenti call it now.  The Pioneer Whatever now occupies the site of the wonderful old StateBuilding.  The RLT – Reno Little Theater – held their plays in that venue for many a year.  And through Semenza’s guidance, their consistency and quality of production was remarkable, and I can’t go too much further into this column without mentioning a name: Blythe Bulmer – actress, director, mentor – Semenza and Bulmer, what a team for so many years, and how lucky our little city was to have them.  How we could use their dedication today…

The Danish community in Reno waned, (their predominant occupation was as dairy cattlemen), and their need for a building of their own ground to a halt.  In October of 1941 they sold their little brick building on North Sierra at Seventh Street to a Dr. S. K. Morrison, who immediately resold it without profit to the Reno Little Theater and carried back a mortgage at an attractive rate while the theater, now with a venue all its own got the momentum growing.  Through Semenza’s stewardship, the theater became a successful business, as well as artistic, success, and the mortgage was retired ahead of schedule.

That early prewar year was frenetic, with much work being done on the former Dania meeting hall to convert it from a hall to a first-class theater facility.  The plays continued through the war years, and the casts of characters in the Nevada Historical Society’s clips – where I got invaluable assistance in putting this together – contain the names of some well-known Reno folks.  Some work was undertaken on the building in the mid-1950s, necessitating closing of the theater, and Semenza negotiated the use of a church on West Seventh Street just off Virginia, and the theater operated as a theater-in-the-round with great success – he called it the “Circlet Theater” – little more than a stage in the middle of the church akin to a boxing ring with no ropes.  In 1954, hometown writer Walter Van Tilburg Clark’s “Track of the Cat” was a hot draw into the Circlet Theater, which was so successful that it operated for a while even after remodeling was completed in the main theater.  I was in one matinee audience to enjoy it.

The thrust of downtown Reno changed; while the popularity of the Reno Little Theater never waned the business side of the endeavor dictated a sale of the old Dania Society/theater building and in July of 1999 the property was sold to Circus Circus, for that casino’s new parking lot parking lot.  I miss it.

Curiously and probably apropos of nothing, one name has surfaced in this column and last week’s which some readers will recall concerned the Christian Science Church: the name is Frandsen.  Sheepman Andrew Frandsen basically endowed the Dania Society’s building, later to become the Reno Little Theater.  His daughter, Anna Frandsen Loomis endowed the Christian Science Church, later to become the Lear Theater.   And Anna Frandsen Loomis’ son, E. Frandsen (Bud) Loomis, was chairman of the Reno Little Theater’s building committee when the theater acquired the theater from the Dania Society.

There’s probably a column in there somewhere, all these Frandsens and Loomises and theaters.  Stay tuned.

Have a good week, and God bless America.