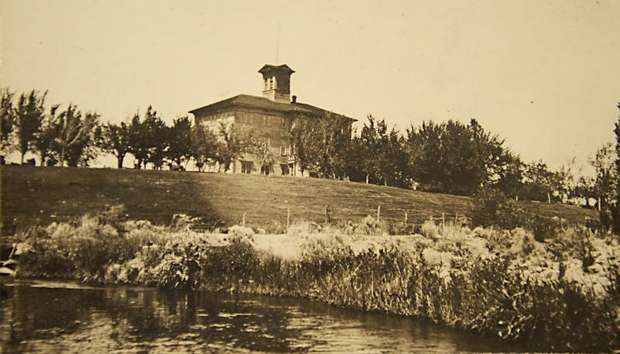 This august site will endeavor, during the next 20 days, to bring back some memories of Christmas around Reno and Sparks that readers of a certain age, if any there be left, might enjoy (this website is on a collision course with reality, because the demographic who reads my stuff is either A/ deceased, or B/ not prone to using the internet. Ergo, I occasionally wonder why I write anything at all.)

But, pressing on, I’d like you to know, or recall, a couple of guys who brightened our Christmases, and with both of them I’m going back into the 1960s.

The first was named, and I write “was” because he was in his early forties during the time we’re reading about, and if he lives, he’d be one old rabbi. His name was Philip Weinberg, and I suppose that in this mid-1960s recollection he had some association with Temple Emanuel, which at the time was on West Street between West Fourth and Fifth Streets. It would soon be relocating to Lakeside Drive just north of Manzanita.

Rabbi Weinberg, as memory serves, took a page from the military, wherein many of the Hebrew faith would take over the posts of their Christian counterparts on Christmas Day, that the latter may enjoy the holiday with their families. Weinberg chose to stand in for Reno’s police chief Elmer Briscoe, a man not averse to lighten his workload on any day, particularly Christmas. Weinberg’s offer was readily accepted by Chief Briscoe.

The interim chief dutifully showed up on Christmas morning, in the stead of Chief Briscoe, and spent his day making the rounds of the police station, visiting with the on-duty officers and taking a ride in a patrol car, cheering the hearts of many, and mostly Chief Briscoe, home by the hearth with his family.

This went on for several years; I’d say six or eight. And as I recall, there was only one problem, the minor matter of a Reno resident being run over, possibly by a sleigh and eight reindeer, and further having the timerity and bad fortune to expire on Christmas Eve yet, leaving Weinberg to do whatever police chiefs do under such circumstances. Otherwise, the watches were quiet.

So, Rabbi Weinberg, wherever you may be, the Ol’ Reno Guy  and all four readers send Holiday greetings to you, and the readers and residents remember you fondly.

The second man we celebrate today I do know passed away many years ago. In about the same time frame that the Rabbi was bailing out the Chief (and my favorite English teacher the late Roberta Kirchner would question my capitalization of both those appellations), there lived among us a sign painter verging on genius, whose name was Red Nibert.

Red operated out of a smallish hut on Mill Street just east of Kietzke, when there wasn’t a whole lot happening on little two-lane Mill Street. For most of the months of the year, Red painted signs. And painted them well; his work had a signature that was fairly evident, and was in demand.

Then one day, in early December of what might have been 1964, like right about now, a Christmas sign materialized on the windows of the newish Sambo’s restaurant on the northeast corner of newish Keystone Avenue and oldish West Fourth Street-slash-Highway 40. The sign was bright and alive and eye-catching, sleighs, reindeer, Santa himself, mistletoe, holly, candles and “Merry Christmas!” emblazoned on maybe four, eight-foot wide windows on the Keystone Avenue side.

Yikes! What was this? A Christmas sign on a commercial building? What genius! The genius behind this was our friend Red Nibert, who painted the window with its extensive detail and eight colors in about 17 minutes flat. Soon Red was loose all over our little hamlet, brightening the hearts of patrons of restaurants, commercial buildings, even the Mapes Hotel and some delivery truck windows. Red was indeed a genius, becoming even more of a genius as each day wore on and holiday cheer infused his creative veins and mind. Credit for all the windows you’re seeing now, goes to the friend I re-introduced you to today, a man of Christmas and Christmas cheer, Red Nibert.

A few final notes beckon for this visit: first, yes, I use Christmas, for it is now the Christmas season, and while I wrote with the highest respect for our Rabbi friend, the fact remains, Christmas is upon us. The second final note for today, is, yes, I wrote the word “Sambo.” I wrote of Sambo’s restaurants a score of years ago and was assailed as being racist. No, I’m not racist; no, the restaurant chain didn’t close because its name was racist (as most think), and yes, the restaurant chain was formed by two dudes, one named Samuel and the other Beauregard, who called their restaurant Sambo’s. Sam and Bo, get it…?

And in closing, one may wonder, “Why the hell is the picture of the Ozi Willium Whitaker Episcopal School for Girls in Whitaker Park on the hed of this column?” And the reason is because in a recent offering about snow and schools and stuff, I mentioned Whitaker Park across the street from where that damn six-year-old kid lives. And it ain’t over yet; next chance I get I’m going to insert a picture of the Babcock Kindergarten, mentioned in the same column.

And won’t you all be happy when the sun comes out and I can get outside and ride my bike!?

One thought on “Christmas countdown: Two men you should know…”