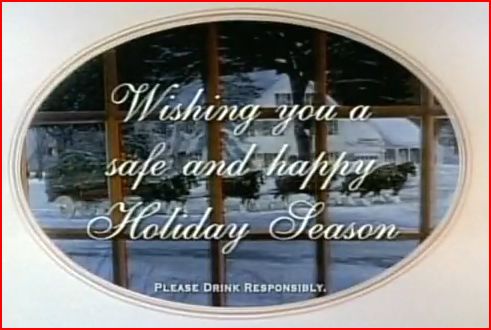 One TV ad has always been the harbinger of Christmas (yes, I still use that word this time of year). The Clydesdales, hitched to a small freight wagon, a cloak of fallen snow on the gently-rolling hillside, the laughing men in rugged garb under starry skies, the horses’ breath evident in the fading light; the wagon, laden with a freshly-cut Christmas tree pulling into the looping drive of a white clapboard cabin with an inviting fire burning inside, its light visible through the cabin’s Cape Cod window.

And all the while, the strains of “When you say Bud, you’ve said it all” swelling in the background, sans the familiar lyrics.

I always thought that that commercial signaled the official beginning of the Holiday season. I once wrote that it was the oldest continuously-played commercial on television (I do think it underwent one change, I’d say in the early 1990s, when the words “Please Drink Responsibly” were added.) Nobody argued. Otherwise, the same commercial, unchanged since the early 1980s. Christmas begins.

Alas, Budweiser is now the asset of a German brewery. And alas, last year, I didn’t see it on the tube. It might have been there, but I didn’t see it.

Watch for it this year. Maybe it’ll be with us again. No one says Christmas anymore, but we can sure as hell have a Bud for Santa on our hearths.