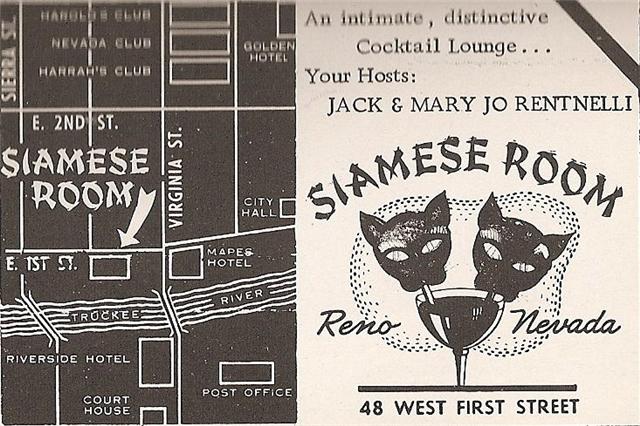 Boy, you skip one day writing a post after you make the public declaration that you’ll strive to post once-a-day, and find out who your friends and readers are. To put it differently, I get more response when I miss a day than when I post something, which tells me that I’d be better off to leave the laptop alone!

OK, today we’ll post an ad that I dredged up when I was writing about the Granada Theater, which was also the home of the Siamese Room, a venerable Reno establishment on West First Street that had about ten seats, and would be considered full to capacity if Tad Dunbar was occupying one of them.

The best part of the ad, save for the recollections of the Siamese that so many of us have, is the map that goes with it. Check out the establishments named on the map, and how many of them are now bygone memories…

Now I hit the “post” button, and with any luck at all, you’ll read this, and frankly the website hasn’t been cooperating lately. Like right now when I try to make the second “o” in cooperating a dieresis and it won’t let me. I think the smoke is getting to me.

Craig Morrison says I have to make two posts today to get even. Maybe I’ll post something about him going into the Reno High School Athletic Hall of Fame next month. But the only picture I have of him is when he was ten, sitting on a pony with a bandana on (Craig, not the pony). Somebody should write a column about the little corral out at the corner of Mt. Rose and Plumas Streets, the edge of Reno, where I think Craig’s picture was taken.

Check back, maybe Buckaroo Morrison will grace our pages.