Back in the mid- to late-1970s a whole new way of eating burst forth, in French, Roquefort or Thousand Islands: A diner could make his or her own salad! Just the way they wanted it! Well, let’s all go down to that new joint at East Plumb Lane at Kietzke – Jeremiah’s Steak House – yippee.

Jeremiah’s was a great place to dine, dinner or lunch; a pleasant series of rooms on different levels that would drive the ADA freaks crazy today. An upstairs loft, a comfortable bar. Lots of wood, nice-looking servers, a real trend-setter in Reno.

And it did a good business from the get-go. A hot place for lunch, business or pleasure, with Strolling Fashions a day a week. The upstairs loft for group lunches, quiet, but not to the extent of tomb-like. Proximate to the airport, if you were dropping someone off or had just landed, a nice meal on the way home.

And steaks! Jeremiah’s Steak House. What’s in a name – that said it all. This was truly a nice place to eat, good prices, service, menus.

What happened? Who knows – somebody probably does, I don’t. One day, a day quite a few years ago, it fell off the radar. It went to seed overnight, it would seem. It closed, and reopened, and opened as a Mexican joint, I think, later a Chinese buffet. And closed some more.

Now, it’s going, going, gone. Too bad. Why do all the nice restaurants in Reno close? Remember Marie Callender’s (on South Virginia)? Hobo Junction to the north? I won’t even mention Eugene’s and Vario’s, but am somewhat proud to have a Bricks in our town. Even although when I wrote about it in the RGJ, twice, some well-meaning editor put in a possessive apostrophe: Brick’s. Twice. If I wanted an apostrophe, I’d have typed one. Like Harolds Club. No apostrophe, Pappy Smith says so. But how often do you see it? Every time you see it.

What’s this to do with Jeremiah’s? I don’t know either. But, if I had lunch with you there, or a nice dinner, let’s look back fondly on that night! 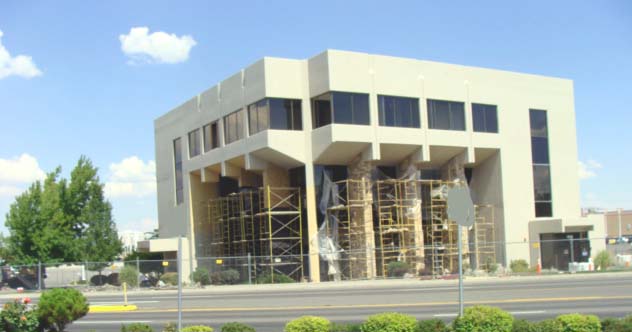 A day or two ago I wrote a piece about the old Union Federal Savings & Loan building on South Virginia Street, that was less-than-complimentary about its design. I pulled it at the last minute, inasmuch that it was in fact designed by an architect, I guess, who might still be with us and whose mother might read this blog.

The thrust of the story, the building’s style be damned, was a huge pat on the back of Heritage Bank, for going into that project full-bore and alleviating some of the design drawbacks of the building. So, we’ll just take the high road here, and pay compliments to Heritage Bank and its leader Stan Wilmoth,

The building went up, I’d guess about 1972, and I don’t know who the architect was. I do recall that there was a pretty good dust-up about its placement on the southwest corner of Park Lane, which had been built four or five years before. (You do remember, that there was a rather significant shopping center on the lot adjoining the Union Federal, now Heritage building northward to Plumb Lane?)

The rancher who sold some of the dirt under Park Lane to the developers, ceded to Park Lane a commitment to maintain the land occupied by Union Federal, now Heritage, as a view corridor from South Virginia Street to the new center being built. That was all well and good, but in a few years to follow the rancher said to hell with that, and sold the land to Union Fed, and all hell broke loose.

I don’t remember the eventual outcome; for as big as beef as it was then I can’t find anyone now who remembers who prevailed in this brouhaha. The fact that the building is there would suggest that Park Lane lost, but maybe some $$ exchanged hands in recompense. Couldn’t say.

Anyhoo, the building, which is most charitably described as interesting, is getting a makeover and some rockwork to break up the endless corners and angles in the front, if it is indeed the front, of the building. Thanks, Heritage Bank, for brightening up the southern edge of our little hamlet’s developing “Midtown” district.

Two points must follow: No, the building was not built of Legos, as some suggested 40 years ago, and yes, Heritage Bank, who deserves a great deal of credit for amassing and maintaining a “local heritage” library in their present quarters in the old FNB building on South Virginia, does indeed have a copy of my book, Which makes me feel very honored!