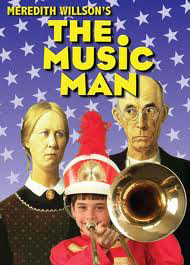 Several days ago a reader took me to task for insinuating that Dave (Buck) Wheat, who too few knew as the brilliant bass fiddle player for the Kingston Trio, wrote the letters attributed to him in my piece (April 14th). Actually, it didn’t seem to bother that reader that the letters were primarily bullcrap, manufactured as a vehicle to tell a few stories about pre-1960 Reno and those who lived in it. The greater concern was my chronology for the production and maturation of the Kingston Trio. I knew damn well that the whole thing was haywire, but, in the pattern of Mark Twain, I’m seldom prone to let a good story get screwed up by the facts. Fact is, most of the column beside what the reader complained about was also sheer baloney.

Curiously, I had a couple other projects going this week; in both, I determined some facts that America has come to love and embrace, are about as off-base as my letters from Buck Wheat that never existed. But this reader seems to leave Meredith Willson and Oscar Hammerstein alone, for works that the whole world has come to love and enjoy: respectively, their Broadway shows The Music Man, and Oklahoma!

Professor Harold Hill, in The Music Man, incants, “…And you’ll feel something akin to the electric thrill I once enjoyed when Gilmore, Liberati, Pat Conway, The Great Creatore, W.C. Handy and John Philip Sousa all came to town on the very same historic day.”

Patrick Gilmore was probably dead when most of the others led their bands, Giuseppe Liberati lived a continent away,  Pat Conway – well, maybe he was in River City, but it’d be a stretch timewise, The Great Creatore like Liberati was hell-and-gone away from River City for most of his career. W.C. Handy, now he was a little younger, a black musician of great renown but mostly for jazz, and John Phillip Sousa – of him, we needn’t write a great deal. The father of the American March – Stars and Stripes Forever!

But – did they ever  all come to town together, as Professor Harold Hill suggests, on that same historic day? Ta-ta-daaaah…I think not.

But – did anybody bother Meredith Willson? Nooooo…  Did they nominate him for two Oscars for his misconceptions? Yup. Did he get a star on Hollywood Boulevard? Yup. Do I get that after a slight mis-step with my Buck Wheat tale? Noooooooooo…

Now, let’s talk about Oscar Hammerstein, just one song, Surrey with the Fringe on Top. That one. Did he write about a surrey, with a fringe on top, with four, count ‘em, four, wheels. That’s how many wheels surreys have. Yup. And don’t the lyrics mention, “You will set behind a team of snow white horses, in the slickest gig you ever see!”? Yup.

And what’s a “gig?” It’s a horse-drawn carriage with two wheels. Count ‘em: two. A “brouette,” an Irishman might say. Or might not. But does anybody bug Oscar Hammerstein? Noooooooooo…  Does he get Oscars, Grammies, Platinum records, a place in the pinnacle of American entertainment (which he richly deserves)?Yup.

Life ain’t fair. One little column, one slight goof, intentional at that, and my career is doomed.

See you tomorrow, right here on the Ol’ Reno Guy. Maybe I’ll tell you about the night I played banjo for the Limeliters at Blyth Arena in Squaw Valley…

That ought to get somebody worked up!