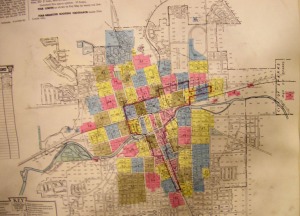 While at the Nevada Historical Society this afternoon BS’ing with my old buddy Mike Maher, the NHS’ chief librarian, I took a few shots of the Sanborn maps that we who research Reno’s history utilize so often.

I worked in my younger years at the Hartford Insurance Company in San Francisco, and can tell you that these babies – huge books with solid covers, 24 by 30 inches with heavy pages that weigh a ton – were one of the greatest creations of good ol’ Yankee know-how ever assembled, starting from Sanborn’s inception in the second half of the 19th Century, creating map books of almost every major, and some minor villages, all over America. The insurance industry was Sanborn’s biggest customer.

The Sanborn system was pure genius, borne of a time when men ignored the time clock and just got the job done – agents in the field, think any medium-size town to metropolis across America, made it their business to know every new structure, and modification, or removal of a significant structure, and conveyed it to Sanborn’s main office in New York City, or a branch in San Francisco, Atlanta or Chicago. The change in the map page for that building would be drawn out, then sent to the clients across the country. The clients would then moisten the back of the changes – which in fact were stickers – and place them over whatever appeared in the existing pages, thus changing the map.

If the Mapes Hotel, shown as a non-combustible, 12-story building occupied as a hotel with gaming on the main floor and Walgreen’s Drug on the northwest corner, was to be imploded, a new sticker would be sent to clients showing a vacant lot at that site, joining the stickers for the YMCA when it blew to the east, then the 40 East First Street office building that was demolished, and the Majestic Theater when it was razed. An insurance underwriter in San Francisco or St. Louis or Houston could look at a map of that block, and see a big, vacant lot.

We who write about Reno use these maps, at the Historical Society; there’s several massive volumes of Reno maps up there, donated by the Reno Fire Department, and the Pacific Fire Rating Bureau, and a couple of insurance agencies. They are no longer in use in the insurance business, nor maintained by Sanborn. The latest issues we have are 1972, but, not all of them were maintained. But they are of great benefit – my quest today was to see if Church Street, parallel to West Second between Ralston and Arlington, used to go all the way east to Arlington. And I learned that it did, right through the present Town House Motel on that site where Church Street was abandoned (Arlington shows as “Chestnut,” the street’s former name and the name on the map page.)

The maps are rich in information; the ages of the buildings, the occupancies, the height and construction, shown in yellow for frame (wood), pink for brick with wood floors and roof, blue for full masonry, and gray for non-combustible (cement floors and walls). The size of the lot it sits on, the size of the water main serving it, the distance to a hydrant, an incredible amount of information for the underwriter, but for us writers, the ages, occupancies, neighbors, dates of demolition. And some unplanned surprises: Stay tuned, and one of these posts when time permits I’ll publish the original name of the New Gym, now known as the Virginia Street Gym at the University. The regents thought they’d eradicated it from memory prior to WWII, but it inadvertently remained visible on a Sanborn map. Cool.

The upper photo is the “key” for the maps – the code for the information the map includes. The center graphic is downtown Reno in a Sanborn page, a lot of pink (brick) and some yellow (frame), the Truckee, the bridges (no Sierra, Center or Lake Street bridges in 1928, but a bridge on Rock Street, by the present Harrah Auto Collection), much information, (note the V&T Railroad track weaving from the southeast, across the Truckee to the SP tracks). See why we can spend hours on one tiny project…! And the lower graphic is the “index” for the map book; Reno split into map pages, to help the user get to the sheet he’s looking for. I’ll post these; I’m still working on graphics in this WordPress webpage so bear with me. And, we’ll have some more about maps in another post in a while to follow 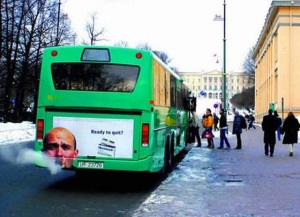 I posted a bus yesterday while I was in a big rush, and lo! Here comes an e-mail with more buses, maybe in retaliation for a cheap way out of my post-a-day pledge.

And this is not my official post of the day. But if this site gets hacked much more, it may be the last…