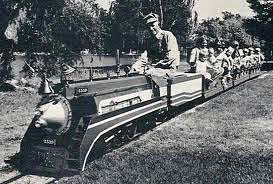 In 1942 the movie Iron Horse opened in the little Colorado mining town of Trinidad, and movie ticket holders were offered a free ride on a miniature train that was operating behind the theater. That short ride was just the beginning of the train’s journey that would eventually take it for thousands of miles, hauling probably a couple of hundred thousand passengers on a ride that’s lasted seventy years and still running this morning, right here in Idlewild Park.

The engine – a coal-burning, steam replica of a Pacific-class steam locomotive – was fashioned by a Trinidad ironworker to pull the four open passenger cars, each holding four adults or three dozen kids. The lash-up soon caught the eye of John and Joe Cihura, sons of Polish immigrants who followed the rails and coalmines from Pennsylvania to Colorado. They acquired the train equipment and relocated it to Walsenburg, Colorado, and set it up after the war as an attraction behind a little restaurant, selling rides at a dime a pop to the kids in the diner.

In 1949, they again moved it, this time to Vallejo, and in 1952 negotiated a contract with the City of Vallejo to operate the train – and a few kiddie cars, a merry-go-round and “airplane” rides – in Blue Rock Springs Park in Vallejo.  Joe and John traveled to Virginia City in their pickup and bought some old ore cart rails that were being salvaged from the mines. The present railbed in Idlewild Park came down from the Comstock, via Vallejo. (For the train nuts, er, aficionados, the rail is set at live-steam gauge of 11-1/2 inches. And the loco is a 4-6-2 class; if you never saw it, it was about six feet long with a great bell, a real two-chime steam whistle, and towed a tender with coal, water and a seat for Joe. End of tech-talk.)

In 1961, the brothers moved to Reno and began negotiating for a site for their train and some rides, and zeroed in on a kiddie park in Idlewild Park. The Reno Arch Lions and the 20-30 Club shouldered the task of putting the park together, working with everyone’s old buddy the late Duke Lindeman from the City of Reno. (Many old-timers remember the huge lion-head drinking fountain, which was eventually replaced because the smaller tykes were afraid to put their heads inside the lion’s mouth for a gulp!)

Our town embraced the little park and the train, the pleasant scent of coal and steam wafting around the park near the California building and the real S.P. locomotives across the river blowing their whistles as they passed the park, and Joe, the only engineer the train ever had, returning a toot for the passengers in tow. Rusty Crook frequently brought the kids from his This Is It Ranch for a ride. Disabled citizens, young and old, were always welcomed as guests. Older children who rocked in their cars found themselves booted off the train in mid-ride. (Every now and then, Joe’s daughter Carol recalls, a waif would show up without the price of a ride in his jeans.  Joe would send him out into the park to find 10 scraps of paper or other junk and bring it back in return for a ticket to ride. John and Joe were the long-time ex officio custodians, guardians and champions of Idlewild Park.)

Change was coming.  The US of A was coming up upon a Bicentennial celebration in 1976. In anticipation of all this gala, Joe and John began rebuilding the coal-black locomotive to replicate the Daylight streamliner locomotive that Southern Pacific was repainting red, white and blue to tour the nation for the Bicentennial as the “Freedom Train.” The miniature Pacific’s boiler was shrouded and the cowcatcher was removed. The loco and cars were repainted. On June 7th of 1976 Joe appeared in a Gazette photo in the paper with the rebuilt engine, and on July 4th, 1976, the new line was inaugurated.

In 1980, Joe and John sold the operation, lock, stock and barrel, to Aldo Andrietta, and took their fifth-wheeler to Alaska for three months for a well-deserved vacation. Aldo ran the park very capably until about three years ago, when he sold it to a Sacramento-based amusement company that owns several other kiddie rides. The Cihura brothers kept the steam locomotive. Aldo opted for another engine the brothers had built, this one a gasoline/propane powered replica of a 1957 General Motors passenger diesel (a steam powered loco was nifty, but firing it up and bringing it up to steam was a chore that only Joe enjoyed.)

Joe passed away in 1986, and on Arbor Day of 1987 a sequoia was planted in his honor. The families’ contribution to the children of all ages of our town was feted in a ceremony near the park’s railroad station, led by then-Governor Dick Bryan and Mayor Pete Sferrazza. Joe’s wife Harriet was later memorialized with a Colorado Blue Spruce across the street by the California Building. Bronze plaques mark each tree.

The Lions Kiddie Park and the Cihura brothers’ train is a long-standing asset of our town, and this would not be a bad morning to take a couple of kids, of any age, out to enjoy it.  As I wrote above, I’d welcome more info about the service clubs that contributed to the Kiddie Park, for a future follow-up column.

What happened to the old steam engine? I could never find out. I’d like to think it’s still running, maybe up in Tilden Park above Oakland with some other old live steam engines of the same guage.      I am grateful to my old friend and retired State Farm Insurance executive Carol Brown – (Joe Cihura’s daughter) – for her extensive input into the column, and, as always, the resources of the Nevada Historical Society and the RG-J archives.