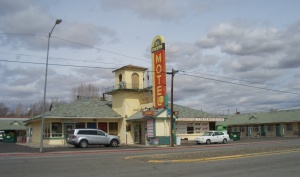 Here’s an old friend, just west of town on West Fourth Street – Old Highway 40 – an old friend because as a child, I ate a lot of good meals there in the coffee shop that was generally crowded with Reno residents and long haul truck drivers, breakfast, lunch and dinner

The highway in front of the motel was always lined with trucks – which then were trucks with a cargo body pulling a full trailer, as opposed to the semi-trailers common today (and I  don’t recall any sleeper cabs then, but I could be wrong.) I fudge a little in calling it the first truck stop; it probably was tied for that honor with Ernie’s Flying A on East Fourth Street, which was still Highway 40, or the Lincoln Highway

And the food? Great – after all, the guy that owned it was an old hardscrabble miner from some central Nevada mining camps, operating before WWII. His name was Bill Parker, a good friend of my dad’s. He made his swag mining gold and silver. Which probably accounts for the name of the restaurant he later opened, a few blocks to the east: The Gold ‘n Silver. You’ve probably eaten there…! 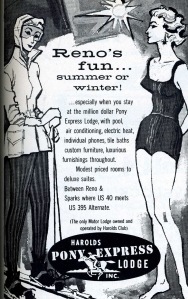 With great fanfare this motel opened in the years after WWII, at the confluence of Prater Way, El Rancho Drive and B Street in Sparks – the first animated neon sign across the street above Cal’s Drive-In (the animation being an arrow flying off the Indian’s bow in the direction of the motel.)

And what a place it was! Ballyhoo-ed all over the West Coast, with the cachet of a Harolds Club organization. (As I type this I get an error message for not using a possessive apostrophe in “Harolds” – Reno advertising wizard Tom Wilson steered the club’s owners away from an apostrophe, and writers have been screwing it up ever since. The club’s advertising never used one, so we won’t either.)