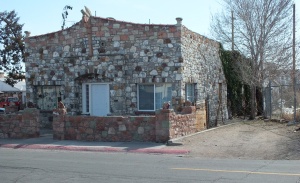 A lovely early spring day today, I went for a walk that took me down Hillcrest Drive between Lakeside and South Virginia. The incredibly beautiful rockwork on the south side of the street, an old ranch house that one has to picture standing by itself when South Virginia was the dirt “Purdy Highway,” Plumb Lane was non-existent, Lakeside Drive to the west was a wagon path not known as Lakeside, for there was no Virginia Lake – that’s when this little dude ranch came to be.

The rockwork could be replicated today only at considerable expense and with some effort to find artisans who could do it; it was probably done by the Indian (yes, Indian, not Native American!) kids from Stewart Indian School outside Carson City. God knows who the architect was, if there was an architect. I should have photographed the “lighthouse” behind it to the south, maybe I’ll go back and snap it over the weekend.

It won’t be there long, sadly. Go by an take a look, a long look, at the rockwork that’s such a part of Reno’s history that rock-by-rock is departing from the scene. And come back in a few days, to see a photo of the “lighthouse” behind this old treasure.