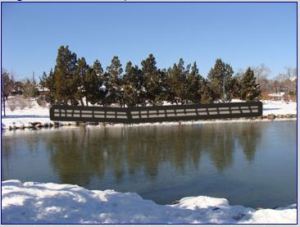 A long time ago if you were walking around Virginia Lake, you would have encountered – at the southeast corner of the lake – a ramshackle-appearing, which is just what it was meant to be, aggregation of cribbing akin to railroad ties forming walls about four feet high, and supporting a roof affair that was kind of open latticework but with some substance and strength. It was pretty rough looking and difficult, if not impossible, to see into through the cribbing. Within it was what always appeared to us sixth graders to be commonplace ol’ hay, piled about a foot high off the earthen floor. Shelves – might have been wooden park benches – were placed around the floor to create higher and lower areas and smallish cubicles with foot-high ceilings, and, partitions of what appeared to be cedar slats like a fence, creating walls of varying height within the room created by the walls and the lattice ceiling. A chain-link fence surrounded the whole thing, save for the east, (lake), side, about 20 feet outside its perimeter (the “fence” in the photos is Photoshopped in)

The thing stretched from north-to-south by the distance of the trees visible in the photo above (there were several trees closer to the sidewalk along Eastshore Drive, and yeah, we played with the horses across the street, still there, different horses now in 2013!) Those trees, to my recollection were well outside of the structure, as it did not go that far south to Eastshore Drive. East-to-west dimension? Dunno, probably no more than 40 feet, if that, from the water’s edge to the west

It was a resting/hatching area for migratory waterfowl, and the more I’ve researched this over the years, the more I find out ergo the less I know. The bottom line I’ll go with, which in my opinion was pretty much from the horse’s mouth, is from the late Ed Pine, Sr., a noted local engineer, Army Reserve commander, University kingpin, School District board member and a bunch of other stuff I can’t remember (president of Isbell Construction? Little League coach extraordinaire? Squaw Olympics Organizing Committee? All of the above.) The gist of it is that to secure funding the builders of the lake – Washoe County, in conjunction with the WPA – needed to supply the fish hatchery south of Mountain View Drive (now a dog off-leash park), the lake’s island, which I was told, albeit 20 years ago, is still a federal asset, and the refuge of which we speak, for migratory bird’s benefit. (I’ll probably hear about all that, but I’ll go with Big Ed’s version). All this started, by the way, in 1936. Ace reader Jean Myles correctly points out via e-mail that construction of the entire lake was basically justified and enabled by designating it as a wildlife sanctuary. Some day when I know that my career is definitely and irretrievably concluded, I’ll recount an old RG-J column wherein I gave a name to the island (which it doesn’t actually have), and recount the story of the tunnel that goes from the furnace room of the Hancock mansion on Country Club Drive and Lakeside Drive, to a gazebo that once sat on the island. (Neither of which is true, but both stories sold like hotcakes about 1995)

I was asked how my recollection of the lake was formed; my response was that I lived as a child on Watt Street, 2300 block, and the lake was our 24/7 playground. Somewhere I have a column of my great August 1954 (?) island capture by neighbor kids in the name of the queen, or somebody, that brought every fire truck and cop in Reno to Lakeside Drive to book us, of the open season on Cormorants that were decimating the fish population (a buck-a-beak bounty from Fish & Game to rid the lake of them; the neighborhood sounded like the OK Corral every morning at sunrise for a month), and of the junk found in the lake when it was drained in 1955. Each afternoon we came home from school and went straight to the lake to see what new treasures had become exposed as the lake’s level sunk (sank?) – it took a couple of weeks to get it down to almost empty. I still use the brass bed frame we found out near the island (kidding)

I’ve never found a photo of the sanctuary There is, in Neal Cobb and Jerry Fenwick’s excellent book Reno: Now and Then, a wartime aerial photo of Virginia Lake on page 37 from about 1,500 feet, a high oblique from northeast looking southwest. As I’m unsure of the provenance of the photo I can’t post it here (a full size version was in Ed Pine’s den, as I recall with attribution to the Army Corps of Engineers.) But, the little refuge is quite visible in the southeast corner of the lake in the photo. You can look at the picture above that I doctored up and visualize what the refuge might have looked like, until it went away in a year I can’t determine – I’d guess no later than 1958

Take a walk around the lake, and in the southwest corner, pause to look at the bygone refuge, and recall that once upon a time two Canada geese, the first ever seen in Reno (1935) were nesting in Idlewild Park and the park maintenance employees nurtured them for a week until they went upon their way. True story – I read it in the Nevada State Journal, 1935, so it’s got to be true. And old timers say that the Virginia Lake refuge was quite well populated by our feathered friends in the WWII years and later – in the mid-1950s only a few were in evidence. (And we left them alone.)

February 25th: I added an aerial picture of Virginia Lake